My understanding of traumatizing narcissists comes from long experience. I began working with cult survivors just a few years after making a complete break with my ex-guru and her organization. My leaving after 13 years coincided with starting a graduate degree in Social Work. Two years later, I had a license to practice psychotherapy in New York, and I had written a paper entitled “Traumatic Abuse in Cults.” I put it online and, almost immediately, it began receiving several hundred hits a month.

That was in 1996. Today, I have a private psychotherapy practice in New York, working with people with all kinds of problems – but there are always a handful of people I am seeing who have left a cult. One thing these survivors have in common is that, at first, they feel so alone. Often, no one they speak to really seems able to comprehend what it is they have been through.

This aloneness, the feeling that it is impossible to explain what you have been through, is what I have been striving to address since I left the cult I had fervently believed in, to which I had wanted to dedicate my life. Explaining what you did, and what happened in a cultic group or relationship, to people who find it incomprehensible, can be a deeply shaming experience.

Shame is the currency of cults and their leaders. The human potential for shame, to feel not good enough, bad or unworthy, is what cult leaders exploit. These traumatizing narcissists instill shame in their followers, using belittling, intimidation and humiliation, alternating these with displays of love and acceptance, in such a way as to convince the follower that their only hope for redemption, for staying in favor and not losing favor, is submission.

Groomed for submission, cultists are indoctrinated to carry shame. When I work with people who have only recently left a cult, they are often obsessed with guilt and shame: about what they did in the group, about having “let themselves” be abused, about the pre-cult relationships they had abandoned. Often, they feel ashamed of the way they left; or perhaps they left only to get into yet another cult-like group or relationship.

Identifying undue shame, and working to get free of it, is important in psychotherapy generally, but it is especially so in working with cult survivors. Having been exploited by leaders who manipulate shame to maintain submission, cult survivors seeking to rebuild their lives should not have to go on bearing the burden of shame indefinitely. There’s no justice in that!

In order to rebuild a sense of self, and work toward creating a meaningful, productive life, the cult survivor will need to learn to focus less on shame, and more on pride – being appropriately proud of oneself. Cults destroy the capacity to take pride in one’s achievements and in one’s self. This is a theft that must not go unrecognized.

Finding one’s stolen pride is necessary to counteract the indoctrinated tendency to view one’s own vulnerability, any flaw or weakness, with contempt. When it becomes possible to dispel self-contempt, and instead feel deep compassion for that vulnerable self, it becomes possible to take pride in who you are and what you have been able to accomplish, before and even during cult involvement. Ridding oneself of undue shame, and taking appropriate pride in oneself, becomes a crucial part of the foundation for building a strong, healthy new life. 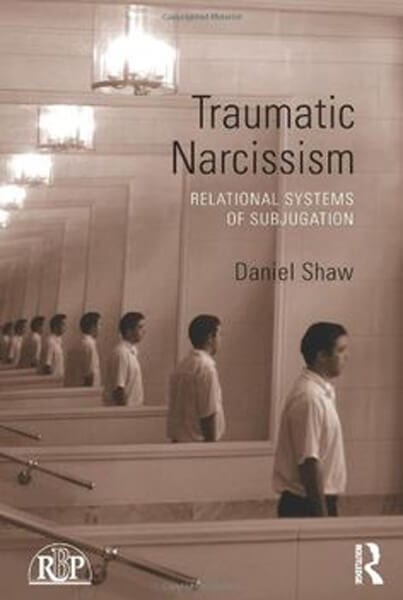 The theory of the traumatizing narcissist’s way of developing relationships that I developed in my book, Traumatic Narcissism: Relational Systems of Subjugation, is my effort to make sense of why cult leaders assume an attitude of utter shamelessness, and why the follower becomes the one to carry shame. I suppose that throughout the years that I spent developing ideas about this, I was operating on thoughts like “knowledge is power,” and “the truth shall set you free.”

Finding an explanatory framework for the relationship I had with my ex-guru has helped me to explore the parts of me that were vulnerable to the demand for submission; and it has helped me to understand why someone so cruel and unstable as my ex-guru could hold so much power over so many.

Here’s a capsule summary of what I mean by the traumatizing narcissist’s relational system:

The traumatizing narcissist (TN) is someone, man or woman, who has been brought up by parents or caregivers who dominated and controlled them through shame. The future TN is taught that having emotional needs makes one weak. They learn that only one person in the family (the most narcissistic) gets to have feelings, needs and wants that matter – and that person dismisses the others’ needs as selfish and irrelevant. Future traumatizing narcissists will replicate this model later in life.

Not all children of this kind of parent become traumatizing narcissists themselves. Another child in this kind of family might grow up to feel insecure, or depressive. But the future TN will take advantage of a less confident sibling, becoming hyper-confident, and dismissive and contemptuous of any kind of vulnerability in others.

Continuing in this pattern, the adult traumatizing narcissist becomes increasingly obsessed with maintaining a rigid sense of omnipotent superiority and perfection – of infallibility, self-sufficiency and entitlement. He defends his conviction of righteousness and justification vigilantly. Only he is right in a conflict – anyone who disagrees with him is ridiculed, humiliated, and sometimes banished. The psychotic nature of the traumatizing narcissist’s delusion of righteousness should not be overlooked or minimized: they are charismatic and powerful, but they are also delusional, out of touch with reality: the belief that you are the center of the universe, superior to all, is a psychotic belief.

Healthy people are able to depend – more or less – on others, to trust, to give, and to take. The traumatizing narcissist must be in complete denial about needing anyone or anything, because for them, dependency is totally shameful. They take or they give, but as far as they are concerned, no one gives them anything, and everyone takes what they have. To maintain this delusion of their own perfection, they need dependency and its accompanying shame to be kept external, assigned to belong only to others.

A traumatizing narcissist has nothing but contempt for dependency in others, yet they are completely blind to how thoroughly dependent they themselves are – dependent on being idolized. Making themselves into idols, and acquiring worshippers, means for them that only those other people, and not they, are contemptible and dependent. But what happens if they lose the worshippers, those who were willing to submit completely?

For traumatizing narcissists to hold on to their followers, they have to attack the followers’ subjectivity to keep them from having their own independent minds, their own view of the world. The follower must be influenced to forsake their own intuition, morals and values, in any way in which they do not conform to the leader’s. Though followers typically believe they are voluntarily embracing the leader’s vision, the reality is that they are coercively manipulated to abandon their own subjectivity and submit to the leader, via the traumatizing narcissist’s triumvirate of abusive behaviors: intimidation, belittling, and humiliation.

Often, when I first begin speaking with someone who has recently left a cultic group or relationship, I sense that I am speaking to different parts of the person. Some parts remain tied to the cult, the leader, the philosophy. These parts are full of fear and doubt, about themselves, about having left. Other parts, appearing with varying degrees of strength, are the re-emerging self, the self that was lost because it wasn’t safe to be present. No matter how battered, that part of the self has survived and is ready to grow. It needs plenty of compassion, especially self-compassion. And plenty of support.

These ideas about shame, and about the traumatizing narcissist’s relational system, are some of the ideas that have helped me make sense of the cult experience, my own, as well as that of many others with whom I have shared what I’ve learned. Cult survivors who can reactivate their own personal subjectivity, and throw off the acute shame they have been manipulated to feel, can focus on the task they are now free to pursue: building a strong, healthy, good life.

What do you think about this article? Do you agree? Have you read Daniel’s book? Do you have a story about an experience with a traumatizing narcissist that you’d like to share? We’d love to hear from you!

Daniel Shaw, LSCW, is a noted psychoanalyst and author best known for his book, Traumatic Narcissism: Relational Systems of Subjugation; he currently maintains his private practices in New York.