Home 9 About Manipulative Groups 9 Religious Cults 9 Muslim 9 ISIS 9 Fifth: “Thou shalt not kill” – The dark side of faith

Fifth: “Thou shalt not kill” – The dark side of faith

You’re walking along the railroad tracks when you see a runaway trolley barreling down. It is about to hit five people standing on the track. You are next to a lever. If you pull this lever, the trolley will switch to a side track. However, there is a little problem: you notice that there is one person on the side track.

You have two options:

What should you do?

When we ask this question, 90% of people all around the world say that they would pull the lever. That is because one is less than five. So it seems that the moral choice of the lesser evil is a matter of arithmetic. This is perfectly in line with Jeremy Bentham’s Utilitarianism: “It is the greatest good to the greatest number of people which is the measure of right and wrong”. So, we might rewrite the Fifth Commandment as follows:

You Shall Not Kill, unless killing fewer people will allow to save a greater number of people.

If it is so, if we want a human being to commit actions that involve the death of some individuals, we have just to convince him or her that this action will allow to save a greater number of people and his or her conscience will not be disturbed. All the better if it is supposed that this majority is wrongfully mistreated. In fact, many terrorist proclamations are based on the concept of the deliverance of mistreated multitudes.

However, if we take a look at a different version of the same moral dilemma, things change. Now there is the same runaway trolley and the same five people on the truck about to be killed, but you are looking from above a footbridge. Next to you there is a huge man. You know that with his bulk he could stop the train and save those five people.

You have two options:

What should you do? When we put the “trolley problem” this way, 95% of people say that they would not push the fat man over. Yet the mathematics is the same: 1 vs 5! The difference seems to be that in the first case, the person dies because he is on the track by accident, and his death is not necessary to save the other five, while in the other case, killing the fat man is essential to save them. To refuse to kill the fat man is in line with Immanuel Kant’s thought: “Act in such a way you always treat humanity, never simply as a means, but always at the same time as an end”. This is a moral necessity, absolute and forever valid, from which all other duties and obligations descend (Kantian categorical imperative).

Jihadist terrorism is comparable to the “fat man” case, not to the “side truck” one. It is the difference between killing someone and letting them die, the same difference we can find between “strategic bombing” (that is, when we bomb military targets and public infrastructures to win a war, even if this makes many innocent victims) and “terror bombing” (an indiscriminate bombing to frighten a country into surrender). The first is in accordance with the doctrine of the double effect proposed by St. Thomas Aquinas: “If a bad effect is not the means by which one achieves a good effect, action is not reprehensible”. Actually, St. Thomas can be used to justify many abominations, but there are situations that cannot be justified even with his advice.

The Utilitarian calculus is no longer applicable to Jihadist terrorism, because the death of ‘Western’ people is not “collateral damage”, but a means to the ultimate goal. Only individuals recognized as “psychopaths” believe that pushing down the fat man is a good deed, but terrorists are not psychopaths. (Silke, A., 2008).

Even if it is admitted that this cold Utilitarian calculus is permissible, this does not take account of human sensitivity. In fact, let us examine another moral dilemma:

Jim finds himself in the central square of a small South American town. Tied up against the wall is a row of 20 Indians, most terrified, a few defiant, in front of them several armed men in uniform. The captain in charge explains that the Indians are a random group of the inhabitants who, after recent acts of protest against the government, are just about to be killed to remind other possible protestors of the disadvantages of protesting. However, since Jim is an honored visitor from another land, the captain offers him a guest’s privilege of killing one of the Indians himself. If Jim accepts, then as a special mark of the occasion, the other Indians will be let off. If Jim refuses, then there is no special occasion and 20 Indians will be killed.

What should you do if you were Jim? You probably would not be able to kill an innocent person, even if it is a good deed in a Utilitarian sense. That is because there is a crucial moral distinction between a person killed by me and a person killed by someone else. We are “moral agents” who decide according to our own integrity and preserving our psychological identity. To kill an innocent person, is not enough to do it because it is good, but we need something that preserves our integrity, that resolves our cognitive dissonance.

That is why many anthropological and sociological theories concerning Islamic terrorism are fallacious. Some readings of the phenomenon tend to minimize the role of religion and faith (or fideism) in favor of explanations centered on psychological, political and social aspects, but to defuse the power of a categorical imperative we need another categorical imperative! To kill innocent people believing we are right we need to hold a world view that does not give equal dignity to “us” and to others. We need a faith! We need an exclusive belief system that posits a one and only Truth and makes us look at the outside world with suspicion, fear and hate. Denying this is only possible by acting like an ostrich or applying to that form of intellectual dishonesty that is called political correctness. So the explanations based on the concept of “superstructure” (globalization, cultural fragility, and so on) only contain part of the truth. Let us see an example:

– Religion has little to do with Islamist terrorism

– Daesh/ISIS exploits the potential of suffering, indignity and humiliation in Muslim societies

This is the scheme: 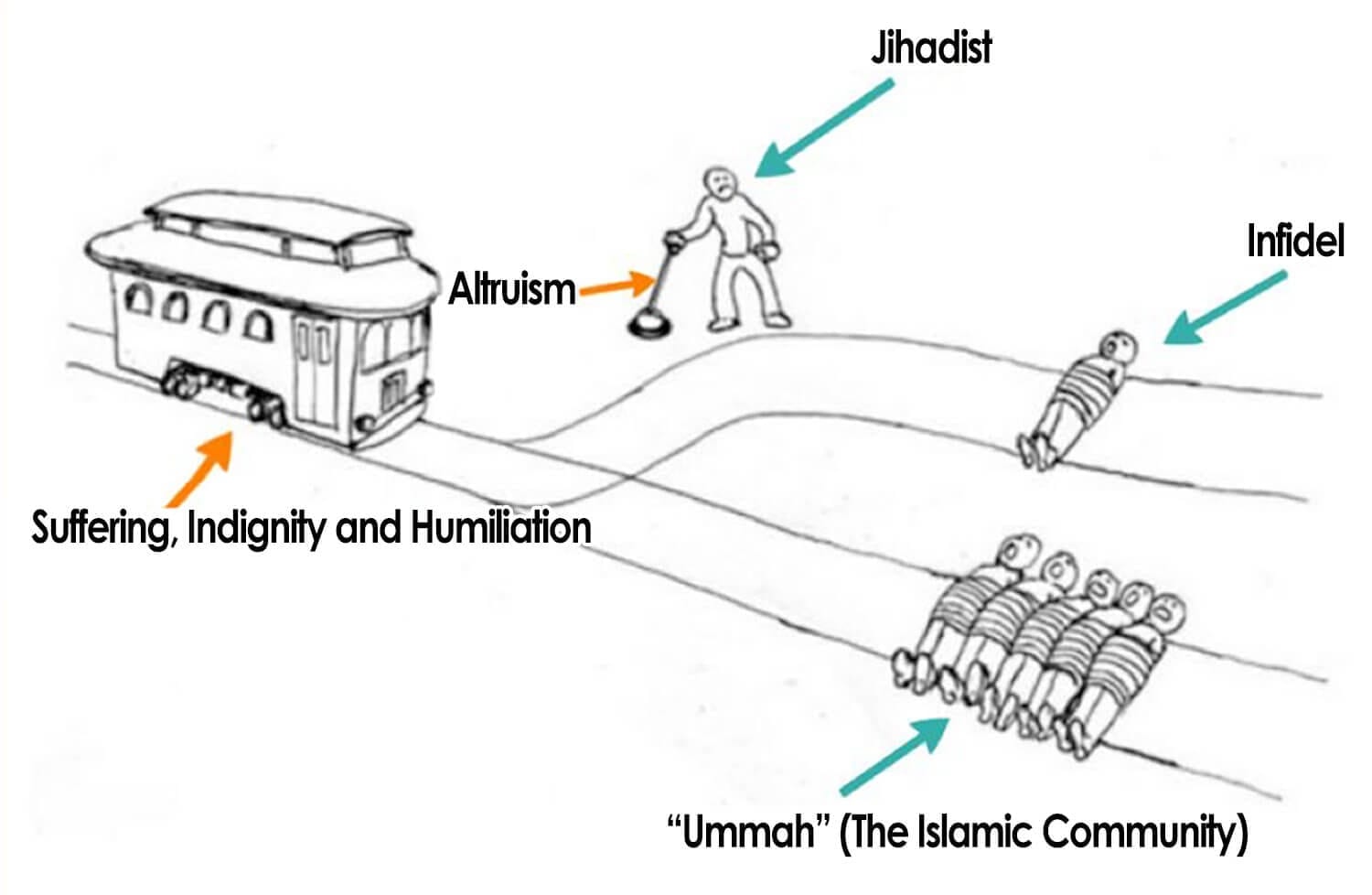 The five on the main track represent the Islamic community that is constantly overwhelmed by the train of humiliation, suffering and indignity. The expendable person on the side track is the unbeliever. The one who pulls the lever is the jihadist and the action of pulling the lever the expression of his parochial altruism. But, as we can see, Jihadist terrorism is like the “fat man” case, and we cannot kill someone as a means to an end.

Parochial altruism does not explain the silence of the categorical imperative (the fat man) and the overcoming of the “agent problem” (Jim’s dilemma), that is, unless the victim is not properly “human”. If we replace the fat man with a gorilla (or the 20 Indians with 20 monkeys), people respond in a different way. They tell us that we can sacrifice a primate to save more of them. Dehumanization passes from Kant to Bentham. This “dehumanization” is only possible thanks to the moral disengagement brought by the exclusive belief system discussed above. 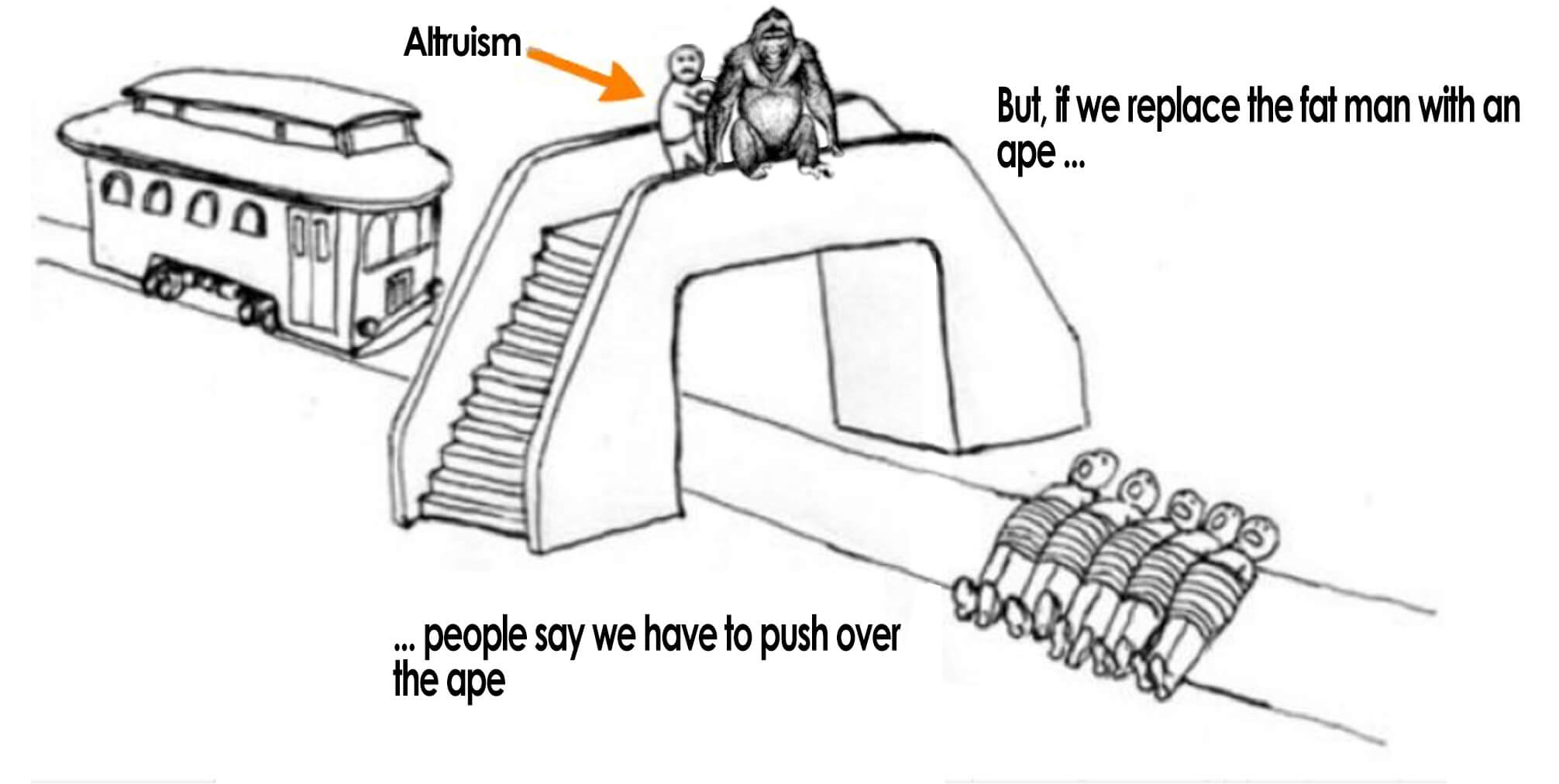 When dehumanization operates, the victim is no longer viewed as a person with feelings, hopes and concerns, but objectified as a lesser sub-human. This is only one of the eight moves to achieve a moral disengagement described by Albert Bandura (1990). Fanaticism can activate each of the eight mechanisms.

Only a blind and fanatic faith can produce a moral disengagement that blows up the emotional servomechanisms selected by evolution (aka, moral dumbfounding). Before modern scholars of social sciences explained the processes of persuasion, before they tried to explain terrorism with complex theorizations -such as Drive-Theory or Social Learning Theory – and highlighted the systematic errors, or bias, needed to fixate an individual into his dysfunctional worldview, three thinkers had already explained the risks inherent in the lack of doubt produced by an exclusive and total belief system: 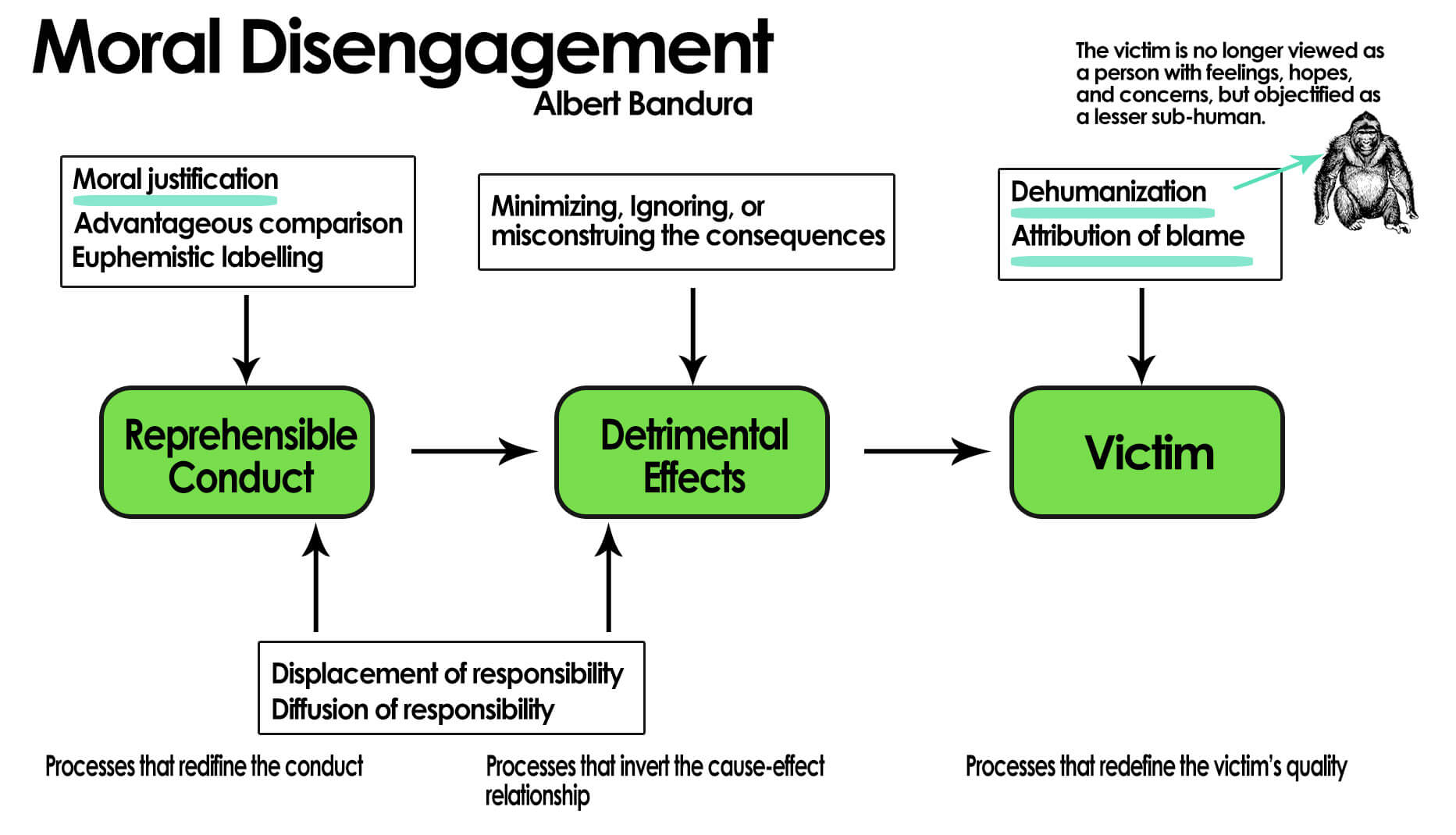 The first thinker was Isaiah Berlin: after a fable by Archouls, he divided men into foxes and hedgehogs. The first are the expression of pluralism, the latter, of monism: “The fox knows many things, but the hedgehog knows the big one”.

The pluralist knows that conflicts of value are an intrinsic, irremovable part of human life (the fox knows many things), so he does not consider it necessary to impose his truth on others.

For the monist, instead, all genuine questions must have a true answer, and one only (the hedgehog knows the big thing); all other responses are errors. Hedgehogs need borders, walls, landmarks.

“The mass neurosis of our age – Berlin said – is agoraphobia”. That is what we call Need for Closure (NFC). There is a strong relationship between “Need for Closure” (ie need for certainty), in measurable clinical scale, and extremism (Kruglanski, Chen, Dechesne, Fishman and Orehek, 2009; Kruglanski, Belanger, Gelfand, Gunaratna, Hetiarrachchi, Orehek, Sasota & Sharvit, 2013; Orehek, Sasota, Kruglanski, Deschesne & Ridgeway, in press).

This could be explained by the second thinker, Max Weber. Berlin’s hedgehogs act within Weber’s ethics of principles. The hedgehog refers to absolute principles, without posing the problem of the consequences that will arise from them (“the operation was successful but the patient died”), making possible moral disengagement, while in the ethics of responsibility, attention is paid to the relationship, means, / purpose and consequences: foxes’ stuff.

Why does the ethics of the principles lead to those that Paul Watzslavick called ipersolutions (dangerous actions which are thought to have a role in one’s salvation)? The answer is in the third thinker, Karl Popper, who said that: “irrefutability is not a virtue of a theory (as people often think) but a vice”. Faith and ideologies are not subjects of confutation, so those theories cannot be confirmed either. We can euphemistically say that the ideas that are supported with more “enthusiasm” are those that are held as dogma and, as such, cannot be validated in their claim of absolute truth. The greatest example is religious ideas, but political ideologies can also make such a claim. Moreover, demonstrable concepts do not require great effort to be imposed; the effort is needed to convince others only of that which cannot be proved, which is, usually, the fact that we are better than them. In fact, as Voltaire said, there are no sects in Geometry.

What do you think about this article? Do you agree? Do you have a story about radicalization that you’d like to share? We’d love to hear from you!

Berlin, I. (1953), The Hedgehog and the Fox: An Essay on Tolstoy’s View of History, Weidenfeld & Nicolson, London

Edmonds, D. (2013) Would You Kill the Fat Man?: The Trolley Problem and What Your Answer Tells Us about Right and Wrong, Paperback