Let’s Sell These People a Piece of Blue Sky 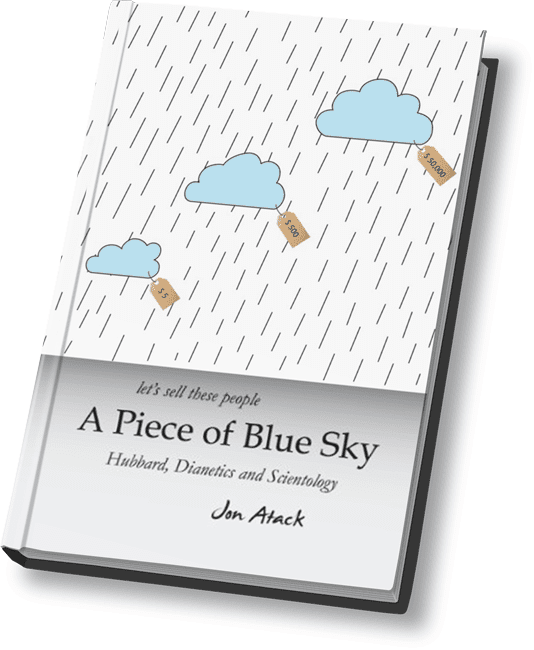 Let’s Sell These People a Piece of Blue Sky: the new, unexpurgated, unabridged version of the classic history of L. Ron Hubbard and Scientology.

Scientology is among the oldest, largest, richest, and most powerful of contemporary cults. The “Church” of Scientology, first incorporated in 1953, claims to have seven million members, and reserves of a thousand million dollars. There are nearly 200 Scientology “Missions” and “Churches” spread across the globe.

During the 1970’s, cults became big business and big news. Yet in the welter of books published about these “new religious movements,” there has been no real history of Scientology. This is rather surprising, because the history of Scientology is at turns outrageous, sinister and hilarious. Accurate information about Scientology is scarce because it is both secretive and highly committed to silencing its critics.

A few sociologists have argued that involvement in any cult is usually short-lived and sometimes beneficial. However, after four years of research, including interviews with over a thousand former cult members, researchers Conway and Siegelman came to very different conclusions about Scientology: “The reports we have seen and heard in the course of our research … are replete with allegations of psychological devastation, economic exploitation, and personal and legal harassment of former members and journalists who speak out against the cult.”

During 1982, a stream of “Suppressive Person Declares” poured out from Church management. Labeling someone a “Suppressive Person” (SP) is Scientology’s ultimate condemnation. According to Hubbard, SPs make up about two and a half percent of the world’s population. Unlike other people, SPs are intent upon the destruction of everything good, valuable or useful. In Hubbard’s philosophy, association with SPs is the ultimate explanation for all illness and failure. Hubbard also called SPs “merchants of chaos” and “anti-social personalities.” They are synonymous with anti-Scientologists, of course.

Novelists often elaborate their own mundane experience into fictional adventures. Hubbard did not confine his creativity to his fictional work. He reconstructed his entire past, exaggerating his background to fashion a hero, a superhero, even. Although Hubbard wrote many imaginative stories, his own past became his most elaborate work of fiction.

Hubbard lusted after fame, wealth, and power, and was clearly willing to abandon moral restrictions to accomplish his ends. By his own admission, Hubbard was a showman. He was a natural entertainer, able to captivate some people with his charm. It often took prolonged, close contact for those so charmed to see that he was arrogant, extravagant, eccentric and a liar on a grand scale. Even then many continued to believe in his genius.

Hubbard could be dismissed as a fabulist, a compulsive storyteller, whose exaggerations were harmless. But he was far worse than this. His avarice, coupled with deliberate deceit, became outright fraud.