People use many justifications to explain why a group is not a cult. Most are ingrained misconceptions about the term ‘cult’. If we learn to recognize these myths, we can stop public excuses for abusive groups, and strip away the groups’ own camouflage. It is just as important for us to know what doesn’t make a group not a cult as it is to know what does.

Here are the top eleven mistaken justifications people give to excuse abusive groups: 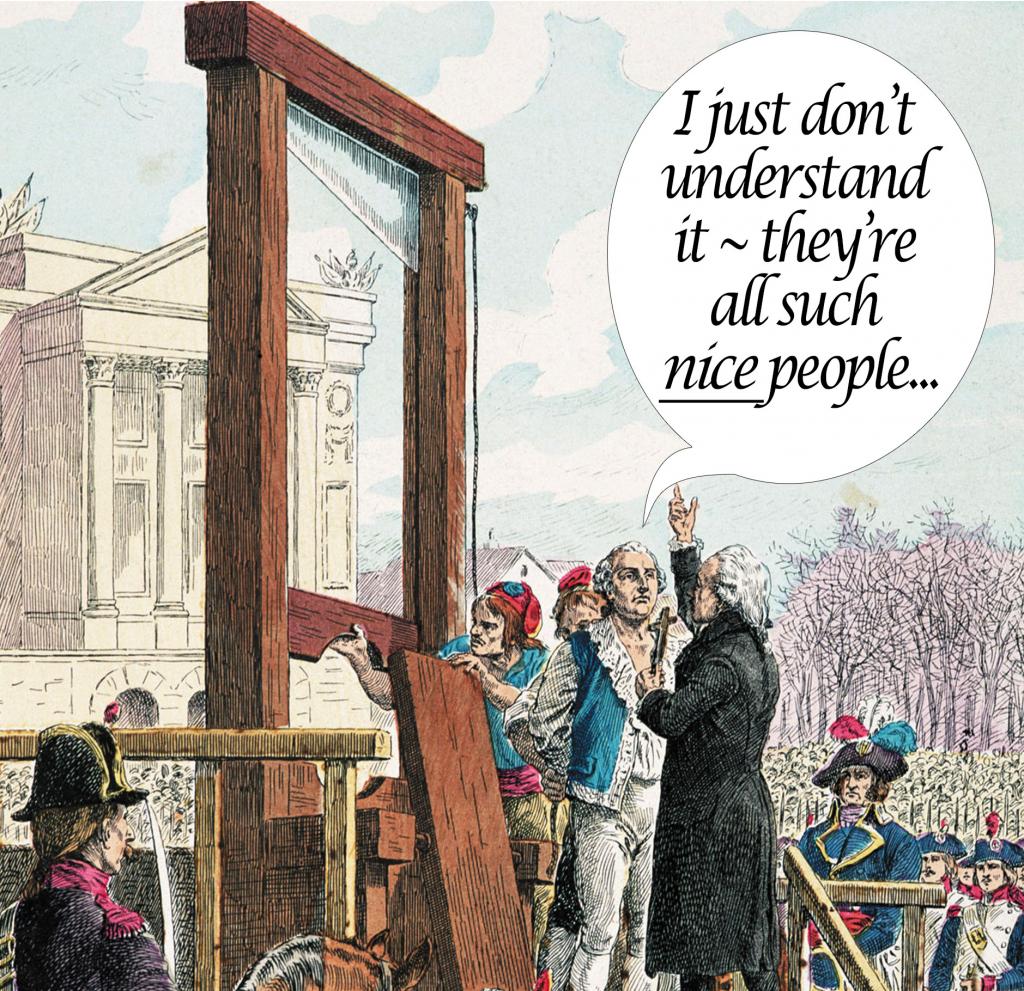 The most common misconception about an abusive group is: “Oh, but this group can’t be a cult. I’ve met group members and they’re such nice people!”

Those nice people are nice. And they’re being used as bait. The true nastiness is usually well hidden at the very top of the abusive group.

2. A lot of their members are very intelligent – there are doctors, lawyers and computer programmers in their ranks.

The ill-fated members of Heaven’s Gate, who committed group suicide in 1997, were highly intelligent people, many of them well-educated professionals from diverse backgrounds. Aum Shinrikyo, the infamous group that perpetrated the Sarin bombing in the Tokyo subway, included surgeons and computer programmers. Aum ran its own hospital, with ten doctors, headed by the reputable heart surgeon Ikuo Hayashi. Followers of Rajneesh were at times called ‘the PhD cult’.

There are even a few abusive groups that recruit their members exclusively from Mensa or other organizations where the intelligentsia gather – the selling point of the abusive group being that only the best and brightest can join. The London based School of Economic Science recruits with promises of philosophical development and has included politicians among its membership. Scientology has included both European MPs and one US Congressman among members, along with many doctors, lawyers and several NASA scientists. It is a common misconception that intelligent people don’t fall for cults: they do.

Most abusive groups have an omnipresent authority figure as a focus for obedience and reverence, but a narcissist is not a necessity – some abusive groups, such as the more disreputable pyramid marketing schemes, readily diffuse the reverence – and the responsibility – by simply creating a leadership class, a layer of core members whose orders seem to come from the group itself. Pseudo-Christian groups say that Jesus is their leader – any actual leadership of the group is cloaked behind multiple layers of committees and ‘servants,’ but in any abusive group, there will be a small number of people making the decisions – and the rest of the group obeying without question. Such groups are not in any way democratic.

4. A lot of what they teach makes sense.

Jim Jones of the Peoples’ Temple taught racial equality and Christian charity. He was given awards for his good works. Any Moonie or Hare Krishna will tell you they are working for world peace. Almost every abusive group has some teachings that are so basic that no one could possibly disagree with them – however, like the ‘nice people’, these sensible lessons stem from the good but misdirected intentions of the group, and are often hypocritical posturing, designed to camouflage and misdirect. If there was nothing good in the group’s teachings, no one would ever join. It is also true that positive public statements are usually contradicted by hidden teachings only available to the inner circle.

We see this sort of thing in advertising all the time. The highest and noblest values are linked inextricably to the sponsor’s product, and, although there is no evidence that anyone in the company follows the altruistic goals painted glowingly in the advertising, we are led to believe that McDonald’s is concerned about healthy eating and that General Electric is working for world peace. Moving away from the corporate and into the cultic, public relations become even more vital. Many abusive groups run supposed charities which at times do help the poor – for the price of indoctrination, handed out with the soup or cast-off clothes. Some groups maintain drug rehab centers, of varying effectiveness and level of danger to the patient (and often at a high financial cost to the victims). Whether or not the charity is socially beneficial, or just another way to launder money for the cult leadership, it will most definitely be used as a high-pressure recruiting ground, not only for those it purports to help, but also from well-intentioned donors. 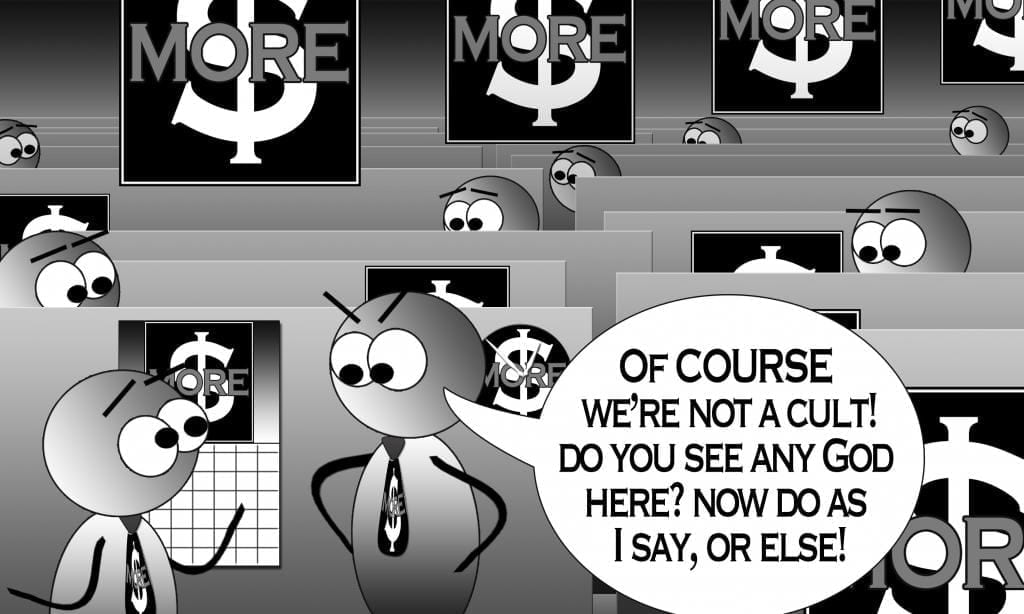 There are plenty of coercive, destructive groups that have nothing to do with any kind of religious or spiritual practice. The threat of eternal damnation helps focus control, but it is not a necessity for the group’s existence. Almost anything can be the focus of an abusive group: political and business cults are almost as pervasive as religious ones, but there are also those that focus on quack medical procedures, self-help processes and psychotherapy groups. Simply put, wherever people gather, a predator can hold sway. Even a book club, with the right mix of people and structure, can become a highly controlling group; there are enough abusive martial arts dojos that benign groups have developed their own lists of criteria for recognizing an abusive group in their midst. Undue influence is found at all levels in our society.

The opposite of the last wrong reason, this is a favorite of some well-intentioned but sadly misinformed members of mainstream Christian congregations. When confronted with such obvious examples as Waco, the Greensboro Baptists, or Jonestown, the descending spiral of “Well, they weren’t following Jesus and the Bible correctly,” is neither helpful nor useful. The fact is that an abusive situation can arise in any gathering of people of any faith, and when those people start believing that their leaders are their link to divinity, the result is usually disaster. The Children of God forced their children to have sex from the age of three, yet claimed to be Christians.

8. They’re not shut away in a compound. They live in our neighborhood and have regular jobs.

Many abusive groups have different levels of membership, with only the core group living and working apart from everyone else – despite the much more visible Sea Org, Scientology “public” live in their own houses, as do the rank-and-file of many high-control organizations. Simply put, it’s expensive to feed and house members – that’s money that the savvy cult leadership will want to spend on other things, like a Rolls Royce collection or solid gold Sega controllers (Scientology’s leader left $648 million and had his own 24-track recording studio, a race track and a 2000-piece camera collection. His Sea Org members were not even allowed money to buy toilet paper). Also, most abusive groups need to keep enough of their believers working good jobs in the community, not only for the income, but for the public relations. After all, if you know someone who’s in a group and they’re nice, then it can’t be a cult, right? Word of mouth is still the main recruiting tool for most cults.

9. They’ve been around for ages.

It might seem impossible for a highly restrictive and insular group to survive in the greater community for generations, but we only need to look as far as the Jehovah’s Witnesses, the Christian Scientists, the New Thought movement and a few other relics of the 19th century’s “Great Awakening” to see that a cult can grow old, and even evolve into a full-fledged totalist environment. If a group can survive the death of its leader, it can pass on the reins of power to the next generation. Also, groups that may not have been abusive in the past can become so, and splinter groups and new leaders can hijack the name and reputation of the old group, and turn it into something completely different (as happened with the Branch Davidians at Waco). There are even some groups where the central organization is relatively benign and the abusive group dynamics can be found in some chapters but not in others.

10. They have a lot of members, and are growing rapidly. 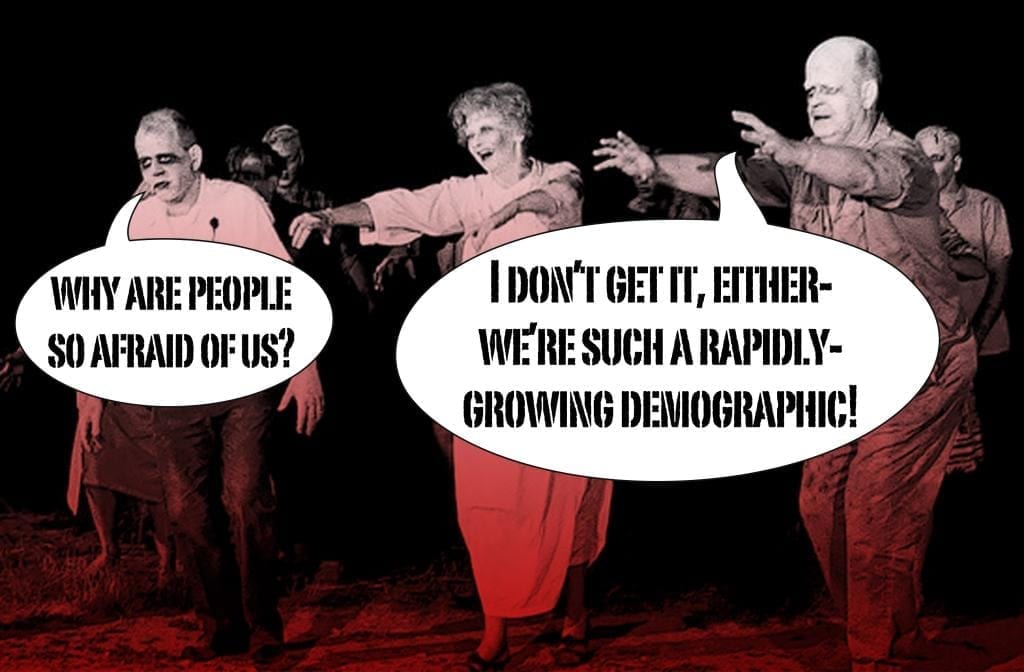 The number of people in a group has absolutely nothing to do with the level of abuse and coercion in that group. Think about the citizens of North Korea, and the level of control under which they live. Even if an organization isn’t just inventing numbers to impress, Scientology-style, and even if their claims of rapid growth are real, it still has nothing to do with whether or not it abuses its members and keeps them from thinking for themselves; it just means they have very good recruiters and even better ways of keeping members committed.

11. A lot of people honestly believe in it.

Throughout history, people have believed fervently in strange things, and with as much honesty as any other believer. In medieval times, most Europeans believed in ‘dog people’. Tales of unicorns, fairies and mermaids were common and belief in them sincere. Daesh fighters are willing to die for their beliefs. A Jehovah’s Witness will give up on college or a good career, the better to serve full time as a “pioneer” doing missionary work. They will allow their children to die for want of a blood transfusion, because they honestly believe. Sadly, committed cult members spend all of their time and energy working for the group, because they believe so passionately in its cause. For what they believed to be the truth, people have murdered small children and pregnant women, defrauded whole communities, and committed group suicide.

In conclusion, undue influence and manipulation hide behind many justifications. We must be careful not to brush aside the evidence when we consider the possible dangers of any group or individual. It is good to believe the best about people, but it is sensible to consider the evidence, if we are to keep society safe from predators.

This article was inspired, in part, by this brilliant video by our friends Robin and Mike at “What’s Up, Watchtower?” ~ed.

What do you think about this article? Do you agree?  Do you have a story about cult camouflage you’d like to share? We’d love to hear from you!