Early one Spring, a Chipmunk, having lost his footing near a stream, fell into the rushing icy waters, and, by the time he realized what he’d done, he had been carried several meters along in the freezing rapids, buffeted and battered by the rocks in the current’s path.

His cries for help as he paddled frantically along attracted many of the woodland creatures, including a Crow, who cawed out: “You silly fool! You shouldn’t have gone so close to the shore this early in the year!”

However, at that moment, a wise old Groundhog raised herself up on her hind feet, surveyed the situation, and bellowed: “Look up to your left, Cousin! There’s a branch coming up – take hold of it!”

The Chipmunk looked up just in time to see the branch, and, gathering his remaining strength, reached out and caught it, digging his tiny claws easily into the wet bark. Once he stopped shuddering with fear, he pulled himself carefully to safety, crawling slowly to shore, wet and bruised, but otherwise unharmed, to where the other animals had gathered.

As soon as he was able, the Chipmunk embraced the Groundhog gratefully. “Thank you, dear Cousin!” he cried breathlessly. “You saved me!”

“You saved yourself, Little One,” the Groundhog answered gently.

The Crow fluttered down beside them. “Well, where’s my thanks?” he demanded, after an awkward pause.

The Chipmunk eyed him coldly, his wet fur bristling. “Why would I owe you thanks? While my cousin here helped me get out of trouble, all you did was tell me what I’d done to get in – and I’d already figured that part out for myself!” 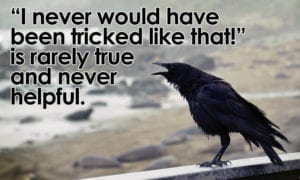 vWhen someone is in a situation that is out of their control – whether that situation is an abusive relationship, membership in a high-demand group, or being caught in the web of fraud – the very last thing they want to hear is how they could have avoided it. That information, while it would have been valuable beforehand, and may be helpful in the future, is not needed by a person still in crisis. People who are being abused don’t need blame; they get plenty of that from their abuser. What they need is opportunities, choices, and practical information on how to escape the danger. It also helps if this information is given with respect and compassion, rather than ridicule. “I never would have been tricked like that!” is rarely true and never helpful.

Although we have mentioned it before, it is worth noting again that Livia Bardin’s free resource guide, Starting Out in Mainstream America is one of the best guidebooks out there on starting over after emerging from a high-control group or abusive relationship. We also heartily recommend Janja Lalich and Karla McLaren’s Escaping Utopia, and of course, Janja Lalich and Madeline Tobias’ Take Back Your Life. For other resources and recommended reading, visit our resources page.

What do you think about this article? Do you agree? Have you read Spike’s dystopian novel? Do you have a story about helpful – or not-so-helpful – advice that you’d like to share? We’d love to hear from you!