Mystical Manipulation is one of the most powerful of Robert Lifton’s Eight Criteria for Thought Reform. Instead of social pressures or cognitive trickery, mystical manipulation relies on the deeper, often overlooked phenomenon of awe – the overwhelming feeling of powerful fervor created by an extraordinary event.

Awe can be produced many ways: through amazement at extreme beauty, through a deep connection with the vastness of the universe or splendor of nature, or even the physical “high” experienced through release of endorphins or taking a mind-altering drug. Any time we have a “peak experience” which is unique, we feel awe. 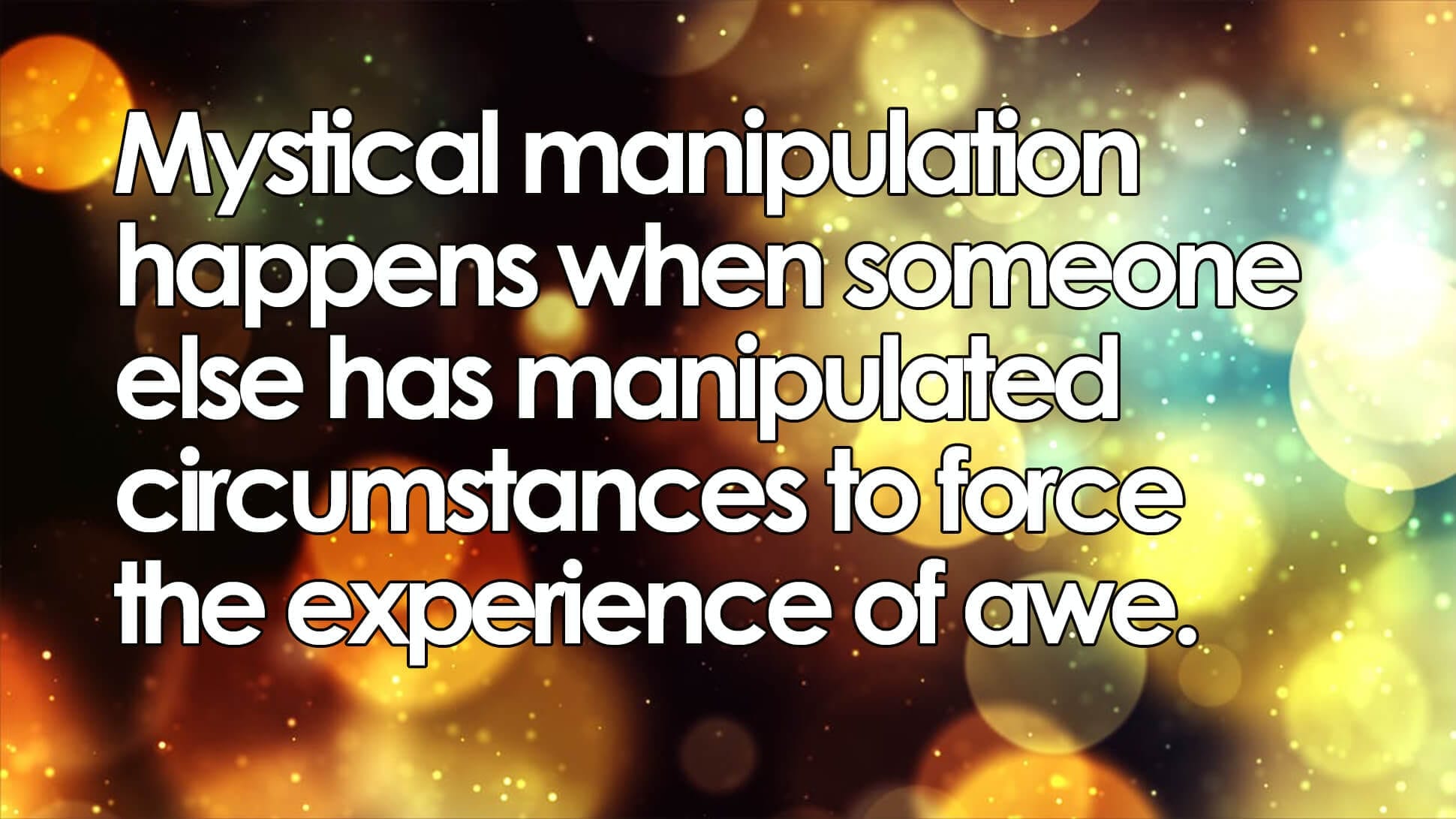 Mystical manipulation is the creation of that awe for the purpose of undue influence, and happens when someone else has manufactured, manipulated, or otherwise rigged the circumstances to force the experience of awe, in order to connect the “high” feeling to something they – and only they – can provide.

A classic example of mystical manipulation is the guru Sai Baba, who had the kneeler in front of his throne electrified, so that those who knelt in his presence would feel a distinct tingle, and mistakenly attribute the sensation to the guru’s spiritual prowess.

However, not all manipulators rely on such technical tomfoolery in order to sway their victims: folk legends can be pressed into service as well. Members of evangelizing groups often trade stories of angels protecting their followers from harm as they proselytize door to door, or recount tales of condemned criminals who ask for forgiveness to Jesus at the last minute, to have the fatal rope slip its knots, freeing them from execution.

“New-Age” groups rely on the average citizen’s ignorance of our own physiological reactions, and attribute the visual effects, which occur when staring at any fixed object, to spiritual phenomena. Stage “psychics” rely on open-ended questions, vague predictions, and the audiences’ willingness to fill in the blanks with assumptions of their own.

“Doomsday” groups will give current events their own spin, using the latest natural disaster, war, or mass shooting to verify their tales of an upcoming Armageddon. Positive news, such as the fall of the Berlin Wall, has been attributed in more than one group to the successes of its members: because they reached a certain goal, they “caused” the event to happen.

Mystical manipulation is not limited to spiritual fakery: fraudsters who sell “miracle” cures rely on the placebo effect to push their products, and practitioners of “energy healing” use our natural endorphin releases to show how their treatments “really” work. A dishonest politician will manipulate statistics to “prove” their points, and an abusive spouse will re-write recent events to show just how wonderful they are.

Whenever someone takes the random circumstances of life and weaves them into an ongoing narrative to make them seem more powerful, wise, or holy than they really are, then mystical manipulation is being used, and a careful critical thinker will take another look, and assess the situation properly.

What do you think about this article? Do you agree?  Do you have a story about mystical manipulation that you’d like to share? We’d love to hear from you!