Without enough human hearts to gorge on, Huitzilipochtli would leave the sun standing still in the sky and bring down catastrophe upon the whole Aztec empire: the crops would wither and the children would die. Who would risk checking if this dire prediction were true, when priesthood were so very certain?

This is phobia induction writ large, and it is exactly the sort of enforced dogma that plagues members of totalist groups and those in totalist relationships. The whole world becomes all or nothing: if you want the world to continue – or to take your place in heaven, or the socialist workers’ paradise – you must obey what on close inspection are capricious rules.

Jehovah’s Witnesses are terrified that Armageddon – the end of our world – will catch them unawares. Former members can break into a post-traumatic sweat at the very thought that they will simply die rather than joining their loved ones in paradise. 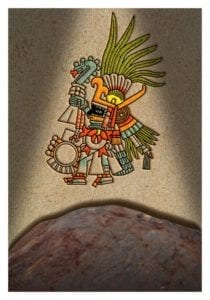 Departing Moonies have to overcome the threat that not only their souls, but the souls of all their ancestors are doomed to hell on their departure. Krishnas are told that they will be returned to the first step of the 84,000 incarnations necessary to be born human once more (or so a Krishna once told me). Scientologists will simply ‘lose their immortality’.

Of course, dire threats have been the rod of control for countless generations. The formula is simple: do as I say, or be reviled and punished.

This all seems laughable when it is someone else’s belief system, but the consequences are just as real in terms of panic as the threats of direct physical violence handed down by gangsters, traffickers and manipulative partners. Most phobias are induced by words rather than blows.

Desensitisation is an approach to diminishing fear. If someone is frightened of kittens, you first of all show them drawings and photographs; then film of kittens playing; you might then put them the other side of a window and then gradually introduce them to a kitten, step by careful step. Eventually, the kitten will sit on the previously phobic person’s lap (this example normally uses spiders, but I didn’t want to frighten anyone. My apologies to anyone suffering from gatakiphobia).

Desensitisation is as much mental as it is physical. If you have been scared half out of your wits by some prophecy of your doom, it is wise to face the phobia gently by peeling away the irrationality. Talking about it to a friend should help. If not, it may be time to find a counsellor.

Eventually, the phobia will dissolve and no longer be triggered by a chance comment. The manipulator may still be dangerous, but the strings of control are cut when a chill of fear is no longer overwhelming.

What do you think about this article? Do you agree? Do you have a story about a phobia you’d like to share? We’d love to hear from you!