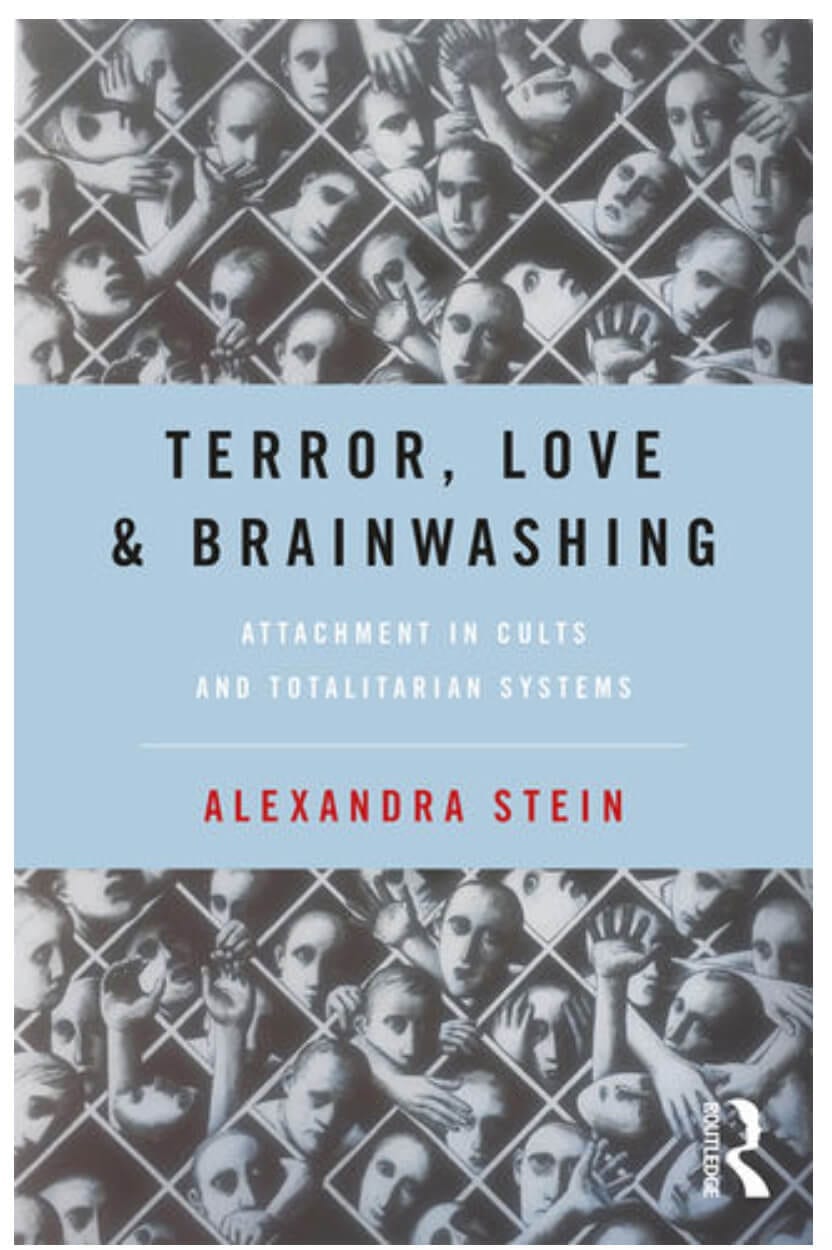 In her lucid, rigorous, and illuminating study of cults and totalitarian systems, Alexandra Stein draws from her own experience as a young woman in a political cult, and from her later doctoral studies in social psychology. In her latest book, Terror, Love & Brainwashing: Attachment in Cults and Totalitarian Systems, she focuses on understanding ideological extremism and other dangerous social relationships through the lens of attachment theory. Her ideas go a long way to making sense of what seems, to those unfamiliar with these phenomena, so deeply senseless. Stein is able to illuminate not what is psychopathological or psychopathic, not what is “other” and “not-me” about cult involvement, but rather how essentially human a process it is.

Love and fear, the essence of disorganized attachment in Stein’s way of understanding it, is a combination that yields dissociation when wielded by authority figures, and it is the universal cult formula for entrapment of recruits. They are persuaded to experience the cult community as a safe haven, but as they commit themselves more fully, recruits enter a state of fright without solution, knowing that at any moment they can be found guilty of insufficient devotion. An illusory safe haven cannot produce a true secure base. In cults, what is created is dissociation and dependence.

Stein presents five dimensions by which a group may be defined as a cult, offering a thorough and precise way of discerning the cultic dynamic: leadership, structure, ideology, process, and outcomes. She shows how the relational dynamics of the disorganized attachment style are enacted in each of the five dimensions.

First, the leader’s psychology determines the structure of the group. He is charismatic and authoritarian; he traffics in a combination of love and fear (or she does – cultic phenomena are gender blind). His charisma attracts followers with the (false) promise of radical acceptance. Simultaneously, the leader’s authoritarian stance keeps followers in a state of fear, obsessed with their status in the leader’s eyes, terrified of expulsion or retribution should they fall short of the leader’s approval. Crucially, the engine of a cult is the leader’s strategy for disavowing the traumatic aspects of his own disorganized attachment experience by cultivating followers to be obsessively attached to him. Successfully guaranteeing attachment to himself, the cult leader disavows his own attachment needs and fears, and manipulates those dynamics in his followers.

The next four dimensions of cultic groups flow from the attachment strategy of the leader. In terms of structure, the group now models the relational pattern set by the leader, and transmits it to new recruits. He creates an isolating environment that supports the process of coercive persuasion. The structure sends commands downwards and resources upwards.

The leader’s ideology is total, structured to be closed and exclusive, entirely concocted by the leader, cobbled together from stolen bits of other ideologies, and considered absolute and indisputable. The function of the ideology is to maintain the leader’s total control of the group. This is accomplished through the process of brainwashing, also referred to as coercive control, thought reform, or mind control, among other terms. Stein explains:

“Replacing followers’ prior trusted relationships with the rigid relationships within the group, combined with the extremely strong compound of terror plus “love,” entraps the follower within the group. Three important behaviors result from this. First the follower is glued in anxious dependency to the group…Second, the seeking of contact with the source of threat causes a cognitive collapse, or dissociation, in the mind of the follower…In the third step, the leadership can now take advantage of this cognitive collapse and introject their own agenda into the cognitive vacuum thus induced” (pp. 19-21).

Finally, Stein describes the outcomes that can be observed in cultic communities: a “leader with extreme control over hypercredulous and hyperobedient followers” (p. 22). The observable outcome of the cult leader’s system is a group of fully exploitable and fully deployable followers. Stein describes this outcome as the result of “coerced disorganized attachment.”

Woven throughout the book are vivid narrative accounts of cult participation, drawn from extensive interviews with former members. Their attempts to make sense of what happened are poignant. She quotes Arn Chorn Pond, a child soldier in Pol Pot’s Cambodia, who says, “Every day I had to kill my own heart in order to endure” (p. 80). In another group, a mother whose baby was taken from her to be raised by a couple the leader had chosen said, “I thought, I don’t want to do this, but I will if that’s what’s best, if that’s God’s will. The leader took the place of God so I thought he’d only do what was best.” Across many groups, mothers were persuaded to allow their children to be abused and neglected because the leader said it was for their own good. Stein quotes another woman, who had been in a terrorist cult, who says:

“I didn’t question anything. I was shown a film of a female suicide bomber blowing up an ayatollah in Iran. It was horrific, and very shocking, at first, but I was shown the film many times, and each time I was less distressed. Eventually, I didn’t bat an eyelid…If the leader had said ‘kill yourself’, I would have killed myself” (p. 85).

And then there are the many accounts of children, such as those in the Khmer Rouge organization, who are told that they should be prepared to kill even their parents, should they show any sign of disloyalty.

Stein clearly demonstrates how cults seek to undermine any secure attachments, any alternative safe havens, in a follower’s relational world. The narratives of these and dozens of others cited by Stein also show experientially what I have suggested (Shaw, 2003, 2014): that the principal trauma perpetrated by cults is the attempt to annihilate the follower’s subjectivity, their experience of themselves as a subject, through the dehumanizing process of total subjugation. The combination of seductive, charismatic love, and cruel intimidation, belittling and humiliation enables the traumatizing narcissist cult leader to create a disorganized attachment experience that imprisons followers in a dissociative world of delusion and self-objectification.

It is impossible to do justice to the breadth of Stein’s research in a brief review of her book. And it is impossible to imagine a more comprehensive, cogent analysis of cults than hers. From how a cult forms, to the psychology of the leader, to the fate of the followers, to the means of escape, to the symptoms and problems of those ex-members who suffer from post-cult trauma – Stein covers it all, organizing an enormous amount of complex information in a way that is always accessible. In a time in history when authoritarianism is seeing a resurgence, and when terrorist cults inflict their cruelty with mind-numbing regularity, Stein’s book is essential reading for anyone interested in the psychological health of the individual, of families, communities and nations.

Daniel Shaw, LSCW, is a noted psychoanalyst and author best known for his book, Traumatic Narcissism: Relational Systems of Subjugation; he currently maintains his private practices in New York.