When people are under the spell of undue influence their beliefs and experience of reality will be controlled by an authoritarian leader, teacher, partner, parent or group and their distorted version of reality. While the person may be intelligent, they will think and act in accord with the manipulator’s reality.

Undue influence is a legal term that has been used in courts for centuries, defining the state of control which exists when a person or group wields too much control over someone, purposely eroding their sense of self and decision-making skills, thereby canceling out that person’s free will and autonomy. 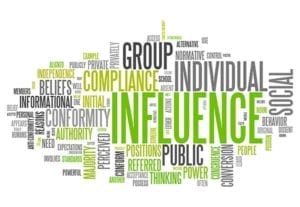 How does undue influence work? Undue influence uses the same social “laws” of human interaction, which keep our culture functioning: normal social cues and feelings such as empathy, altruism, and need for community, which are so valuable in inspiring us to work together. Unfortunately, those social cues are subverted by predators or authoritarian groups not willing to function within the rules of “social ‘laws’ of human interaction”. In fact, predatory individuals and groups can become very good at manipulating trust, using charm and flattery to harm people.

What is institutionalized undue influence? It is influence that has been incorporated and formalized into a highly-structured organization that conditions its members not to think or to act independently in their own best interest. Often members are required to devote a large percentage of their time or money to the organization.

Why is the brain susceptible to undue influence? It is partly because we have blind spots. The brain fills in material – we make up some of what we believe we see, as easily demonstrated with lack of color in peripheral vision. Psychological studies show how easily rational thinking can be bypassed. Our human perceptions are limited, and we interpret the meaning of those perceptions automatically. We “fill in” reasons for events that are difficult to understand. We focus on what we expect to see, or what we are prepared to see. This opens the door to con artists, as well as the hocus-pocus of demagogues, whether political or religious in their claims.

How much of a problem is undue influence in today’s world? Millions of people—especially those who experience a significant emotional event—are affected by undue influence; most are oblivious to its effects. Undue influence ranges from being bullied into submission in a personal relationship or the workplace, to failure to report child molestation to the proper authorities to shield an organization or individual; from recruitment into hate groups, such as gangs and terrorist groups, to being cajoled into a high-control religious, political, therapy or commercial group; from uncritically accepting false information, to tragedies in medical care through faith-based medical neglect.

Why are young people more susceptible to undue influence, making it important for them to recognize when they’re being influenced unduly? To learn and become socially adept, children must be influenced by adults. But this makes them more susceptible to undue influence. This is especially true for adolescents as they naturally rebel against adult influence. Without education, young people can be easily seduced into gangs, hate groups, cults and abusive relationships. Without proper psychological education, they are particularly vulnerable to manipulation from predators and coercive groups. In part, this is because they are undergoing significant brain development, which hinders their judgment. When they are older, these former adolescents may deeply regret and feel ashamed about decisions they were manipulated into making which damaged their relationships, their mental and physical health, and their future prospects.

What can we do about undue influence? We can recognize that it exists. Report bullying and abuse. Name predators and high-control authoritarian groups and hold them accountable. Educate young people about how they can achieve personal autonomy and offer more programs and resources in this regard. Teach them about logical fallacies, cognitive dissonance, intelligent disobedience, etc.

Teach people when to be curious – to question, to assert their opinions and when to turn tail and run! We can learn to protect ourselves, our kids and our friends by teaching – and using – healthy skepticism, intelligent disobedience and critical thinking skills. It is also vital to learn to spot predators and totalist behavior, and learn to recognize the common methods of social manipulation, as well as fostering a culture that values autonomy and independence.

Educate young people, their parents and their teachers how to recognize the predatory tactics of undue influence and the value of developing critical thinking skills, as well as social intelligence to achieve independence in decision making and emotional autonomy by sensibly interpreting their personal experiences.