Shunning, one of the most abusive practice of high-pressure groups, is often the most obvious sign that a group is abusive. It tears families and communities apart, forcing many to choose between their faith and their loved ones. Whether it is called Shunning, Disconnection, Ostracism, or De-FOOing, the harsh reality of alienation ensures that those who leave the group are cut off absolutely, often losing their entire community – friends, relatives, and their complete support system. 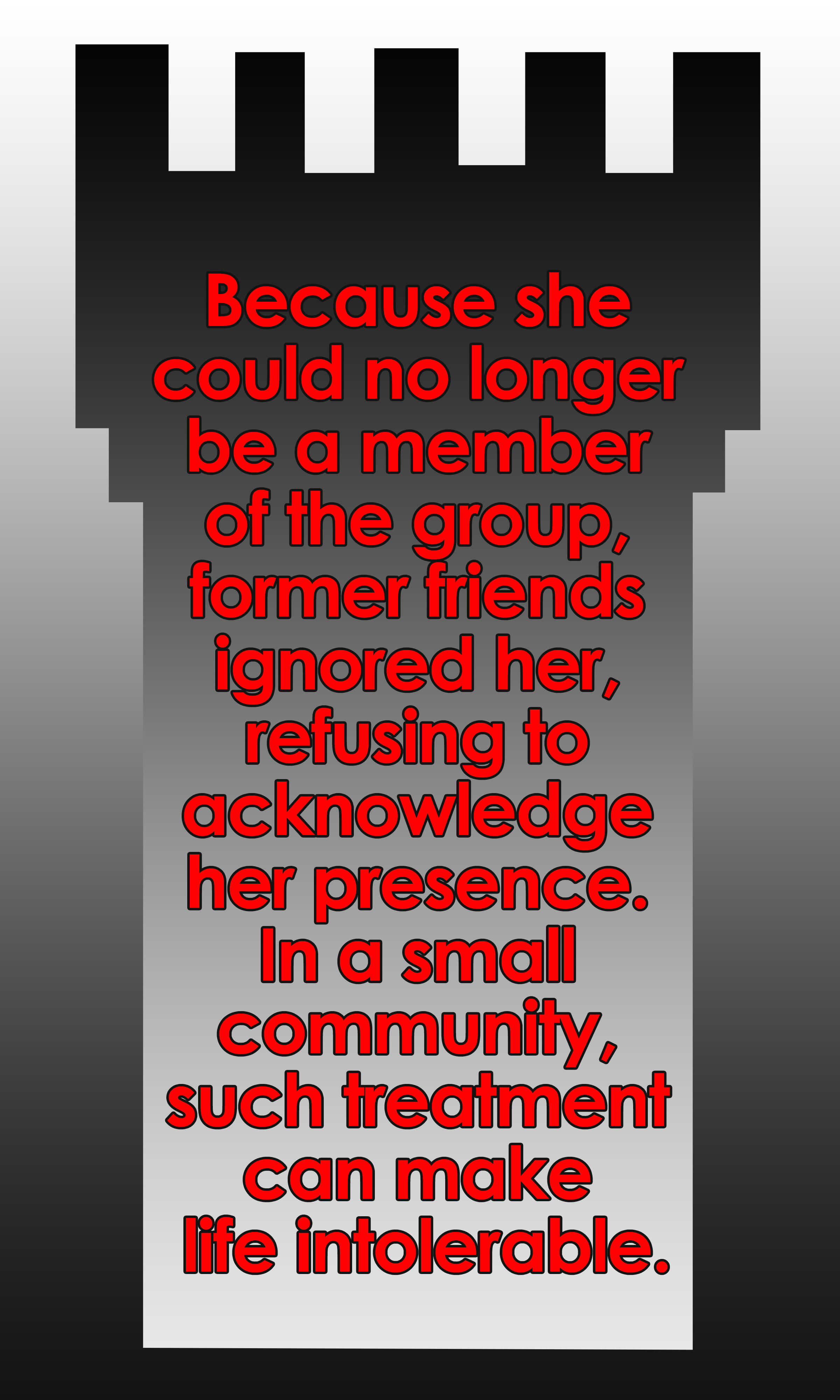 For one woman in Michigan who had left the Jehovah’s Witnesses, the strain of losing her community was too much, and, struggling under the weight of the shame her abusers had taught her to assume, she drowned the family dog and shot her husband and two adult children, before turning the gun on herself. According to family friends, Lauren Stuart and her husband had left the organization because their children wished to attend college – something the Jehovah’s Witnesses strongly discourage – and she wished to pursue a modeling career. Because she could no longer be a member of the group in good standing, former friends ignored her, looking the other way when seeing her in town, refusing to speak with her or acknowledge her presence. In a small community, such treatment can make life intolerable, and although the Jehovah’s Witnesses have claimed in court that shunning is a “personal choice” and never absolute, their own internal convention videos show a harsh reality, where parents are coached to ignore their own children if they are disfellowshipped.

Although details in this case are still forthcoming, it is clear that such tragedies will continue to happen whenever people are shunned: this is not the first incident of a Jehovah’s Witnesses committing a murder-suicide in reaction to shunning: in 2001, Christian Longo murdered his wife and three young children in response to his expulsion from the Jehovah’s Witnesses, and in 2014, another Jehovah’s Witness father in South Carolina murdered his wife and children before committing suicide. Sadly, the Watchtower is not the only organization that practices this most cruel form of undue influence.

Our friends Robin and Mike of What’s Up Watchtower, themselves ex-Jehovah’s Witnesses, have produced an excellent video discussing the case in depth; it is a deeply personal subject for them, as they have lost their own families to the evil practice of shunning. Also, our friends JT and Lady Cee of Ex-JW Critical Thinker have interviewed Joyce Taylor, a close personal friend of the Stuart family, herself a former member of the group. Both videos are thoughtfully done and provide compelling listening.

At Open Minds, we believe that all people should be able to practice the faith of their choice, or not practice, as their own conscience and beliefs dictate – without the threat of losing their friends, their family, and their community.

What do you think about this article? Do you agree? Do you have a story about shunning that you’d like to share? We’d love to hear from you!