Saving a Thousand Lives a Year: Reforming Watchtower’s Policy on Blood – Part One

Growing up as a Jehovah’s Witness 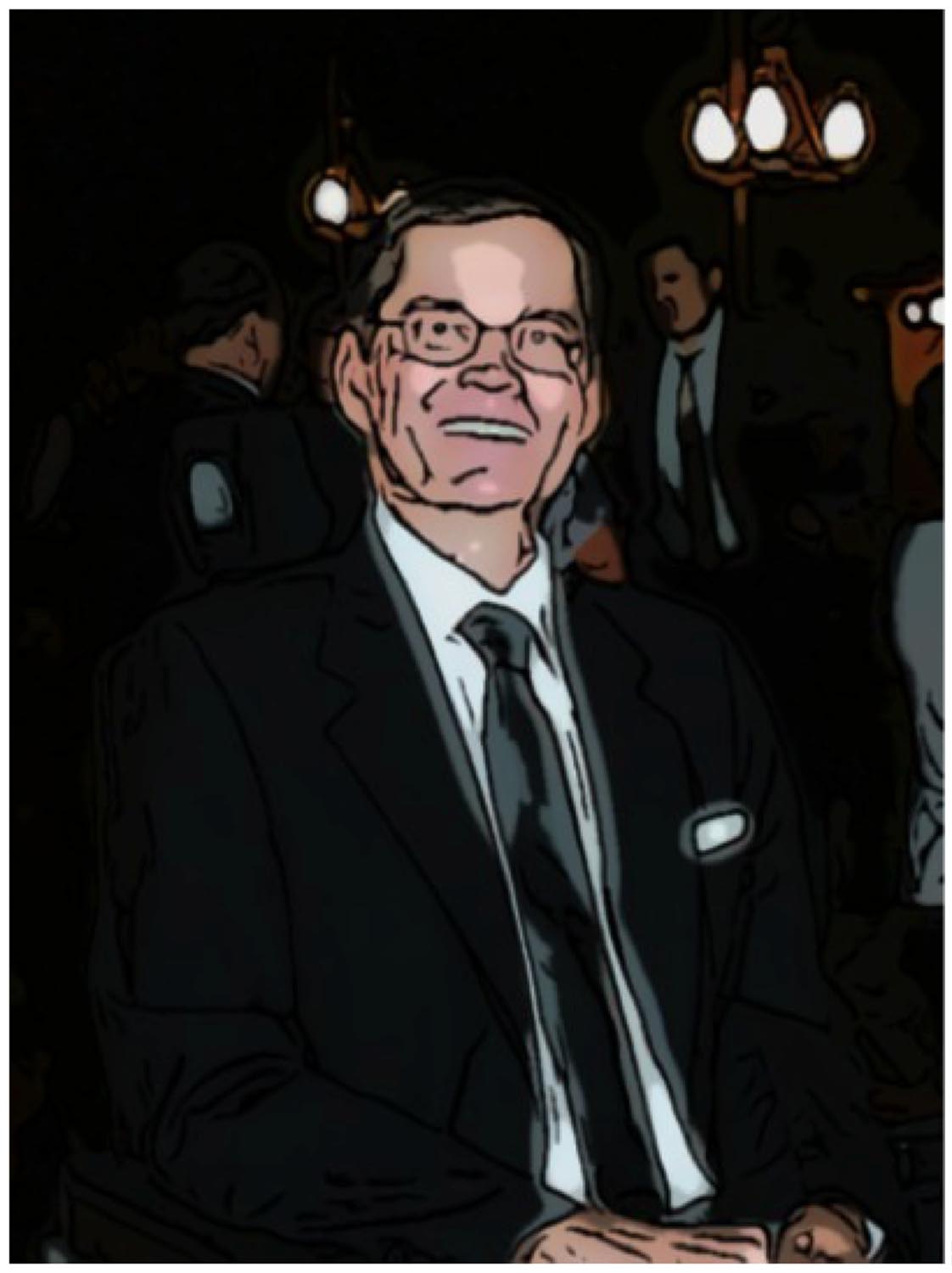 Raised as a Jehovah’s Witness (JW) and baptized at the age of nine, I was very serious about what I believed to be a unique life-saving religion. I was also deeply concerned by the coming “great tribulation” and the battle of Armageddon that I was assured would occur in my lifetime – a theme I heard constantly at the Kingdom Hall and from other JW’s who were glued to every word the Watchtower published.

At the age of fourteen, I received permission to stop attending public school and begin “pioneering”: first temporarily and a year later, a full-time pioneer. Most JW’s were expecting the “great tribulation” to break out in 1975, so I was trying to save lives by spending a 100 hours a month in the door-to-door ministry. It was an exciting time, because I was part of a tight-knit community convinced that the long hoped for “new order” would arrive any day.

Even the City Overseer sold his business and was pioneering, by October of 1975. I clearly remember stopping for a break in field service and having coffee with him, along with two other elders. It was the weekend of October 4th and 5th and we were sitting in the coffee shop of a Holiday Inn, certain the “great tribulation” was imminent, perhaps that very weekend.

Of course, nothing happened that remotely approached what the Watchtower had strongly suggested, both in print and through its appointed representatives. But, like most true-believing Jehovah’s Witnesses, who are handicapped by their lack of understanding of cognitive dissonance, I was able to consciously discard this reality. So, I continued pioneering, trying to save lives from an impending just-around-the-corner Armageddon, for another two and a half years.

However, something that would forever alter my path in life was happening. A friend in the congregation I attended was diagnosed with Leukemia, the same condition that, years before, had prematurely claimed the life of my Witness grandmother after she had refused blood. 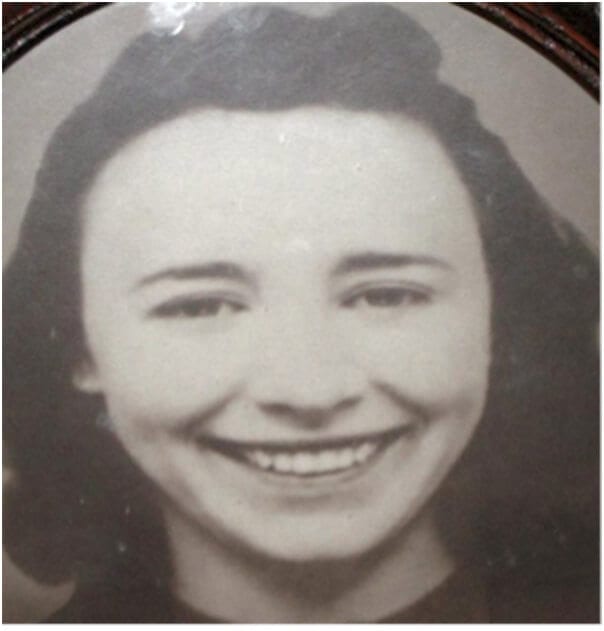 My grandmother as a young woman

Like my grandmother, Candy also refused blood and became gravely ill. She knew she was going to die, and asked me if I would be a pallbearer at her funeral. Candy was just fifteen years old when she died, and I was only sixteen when I helped carry her coffin out of the Kingdom Hall. That experience left a profound impression on my young mind.

In 1996, after being a JW elder for about nine years, I started to research the Watchtower’s blood doctrine independently. This extensive research convinced me that the blood policy was seriously flawed, and had resulted in needless premature death and disability for thousands of JW’s – many of them children, like my friend Candy.

Early on in my research, I suspected that Watchtower writers and policy makers also saw flaws in the blood policy. This was evident by the use of so many blood plasma products, the many changes in policy, and the way the changes in the blood doctrine were justified. So I decided to try to “reform” the policy from within the organization.

In 1997, I built the first version of ajwrb.org which I called: “New Light on Blood”. I also created a pseudonym for myself, the “Liberal Elder”, later shortened to Lee Elder. If I had used my real name, I’d have been coerced by the other elders (acting under the direction of the Watchtower’s policies) to desist from this kind of activity. If I had refused to desist, I’d have been disfellowshipped and shunned.

I was immediately contacted by many JW’s – many of them elders and Hospital Liaison Committee members. They had arrived at the same conclusion, with similar goals as mine. That was the birth of the Advocates for Jehovah’s Witness Reform on Blood or AJWRB, which took the Watchtower Society by surprise.

The Watchtower had never seen the likes of this before: it was a movement within the organization to reform the blood policy, spearheaded by elders and Hospital Liason Committee (HLC) members who were eyewitnesses to the suffering and death of their fellow believers. We were an organized group with a voice that the Watchtower could not simply silence by excommunicating us.

As time passed and I expanded my research, I learned about the Watchtower’s troubled past and other doctrinal irregularities, which are difficult to avoid once a Witness opens the Pandora’s Box. One of the early books I read was Crisis of Conscience by Raymond Franz, a former Governing Body member. I later read Ray’s book, In Search of Christian Freedom, where the chapter on the Watchtower’s blood doctrine gave some excellent insights into this issue.

In 1998, I began receiving regular reports about a controversy between the Watchtower and the Bulgarian government. Then I received news that Bulgaria had banned Jehovah’s Witnesses, in part because of the blood policy. The Watchtower then filed a complaint with the European Commission on Human Rights (ECHR).

The ECHR in Strasbourg, France

In this written complaint, the Watchtower argued that the government’s claim was false and without merit because there were no sanctions ever taken against a JW who accepted blood; that individual JW’s had a free choice in the matter. They even argued that a child could not be considered a member.

Sadly, these misrepresentations caused the ECHR to side with the Watchtower, and they issued the following ruling: 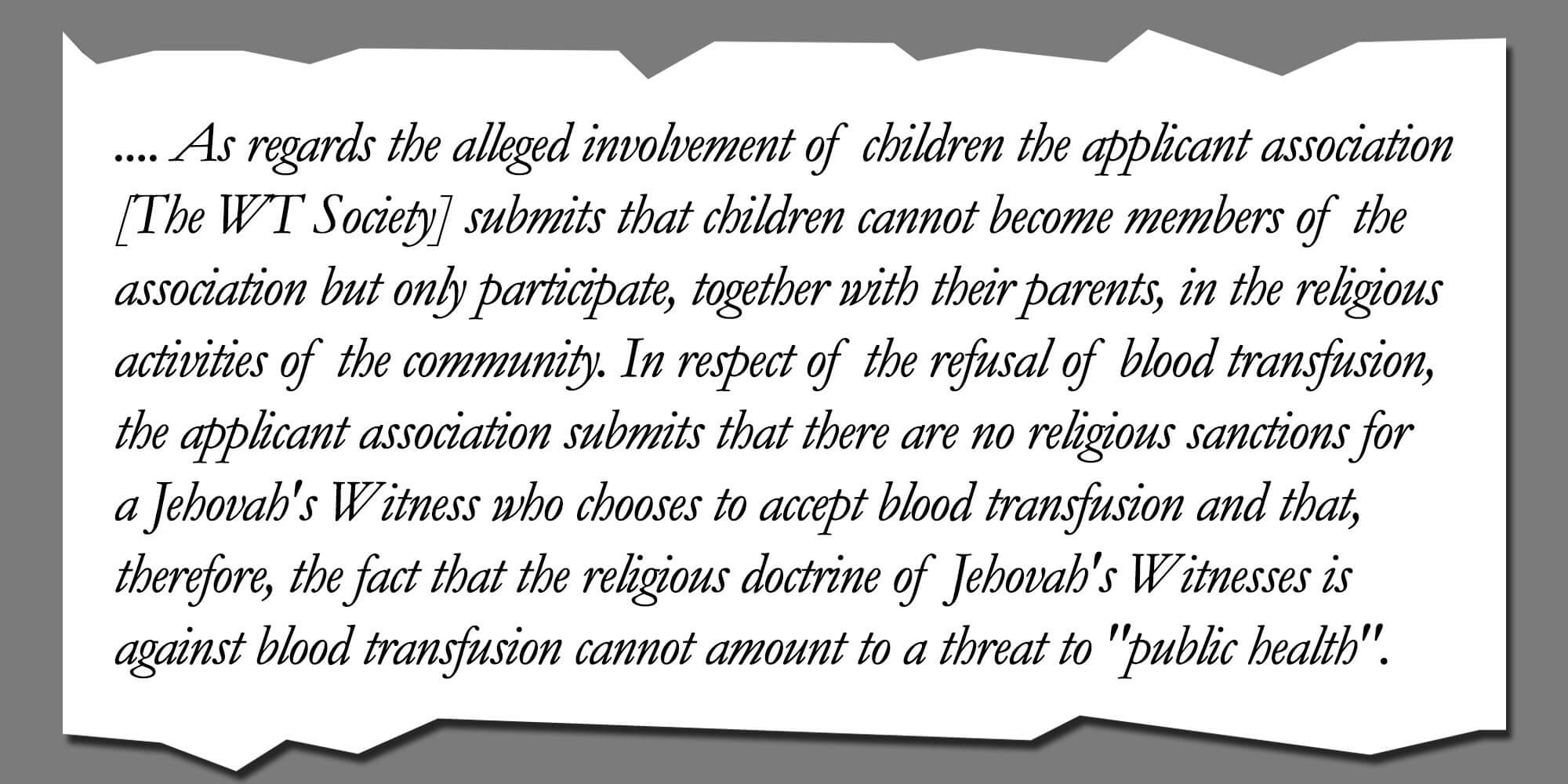 This assertion, which the Watchtower had presented to the ECHR, was a complete surprise to me, as it ran counter to everything I had been taught and experienced as a Witness and an elder. At that time, the use of any non-Watchtower approved blood product was a “gross sin” which required an investigation by a judicial committee, and possible disfellowshipping with subsequent full-scale shunning. I also knew that children were considered to be members, because my brother and I were baptized as minors (me at age nine), along with many other JW children I grew up with, like my fifteen year old JW friend Candy, who was baptized and died over the issue.

After the situation in Bulgaria was publicized, with the Watchtower claiming that the taking of blood would not result in “disfellowshipping”, some notable journalists concluded that the Watchtower was abandoning its blood policy – or at the very least radically modifying it. Based on Watchtower briefs to the European Commission on Human Rights, this was a reasonable conclusion. The only other possibility was that the Watchtower was maintaining two separate blood policies – one for Bulgaria and one for the rest of the world.

Once the first press reports were published, the phones started to ring at Bethel branches around the world, as individual JW’s and journalists sought confirmation regarding what had transpired. The Watchtower was forced to act quickly to try and correct the understandable confusion, and limit damage for perjuring themselves, by issuing a press release denying anything had changed.

Here is that press release: 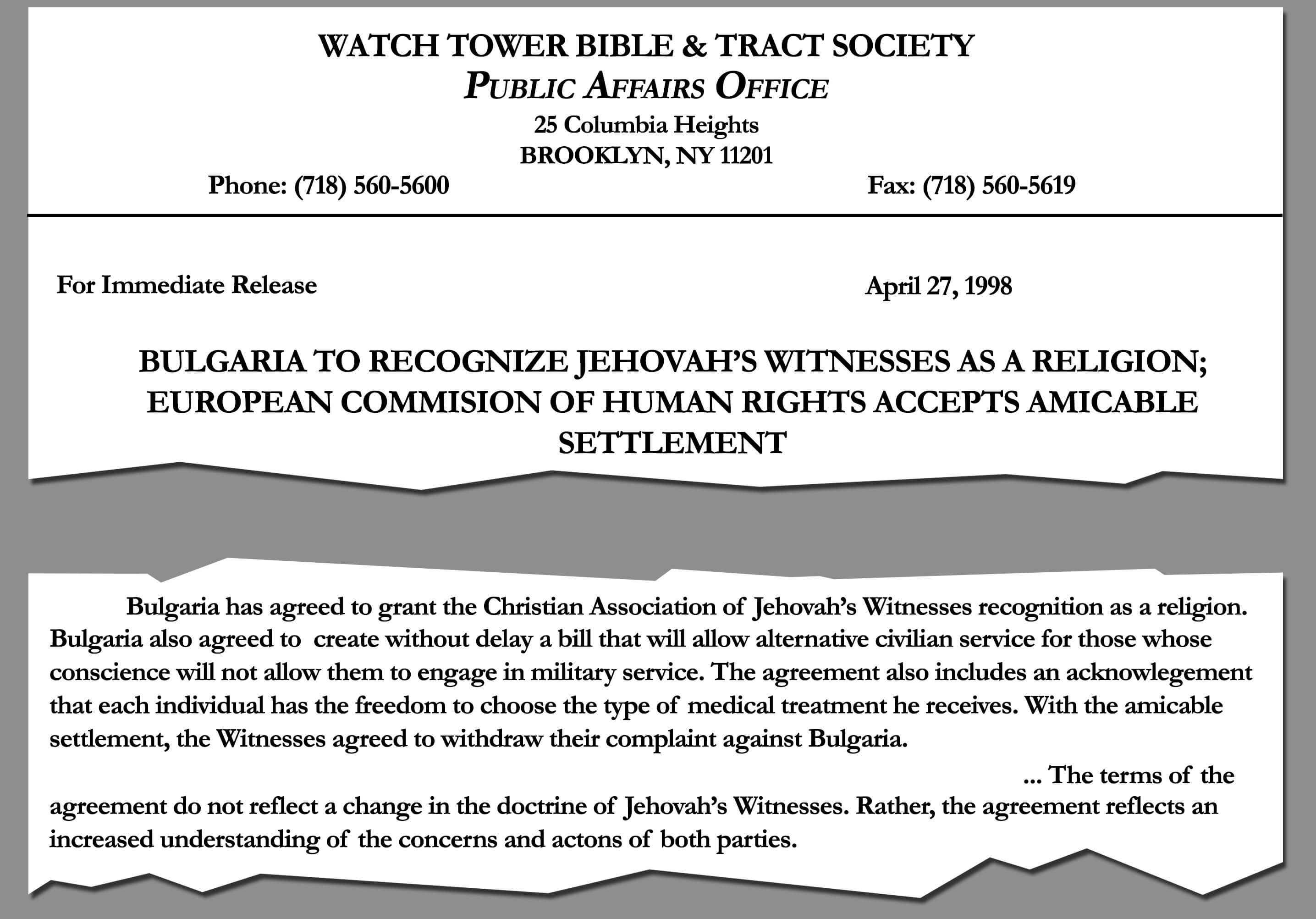 This was a clear example of Watchtower officials talking out of both sides of their mouths. One story was for the government of Bulgaria and the European Commission on Human Rights, but there was an entirely different story for inquiring JW’s and the press. The Watchtower refers to this tactic as “Theocratic Strategy”.

Nothing newsworthy about Watchtower lying

I phoned former governing body member Ray Franz to discuss the situation in Europe, and he suggested that I contact John Dart, who was the religion editor for the Los Angeles Times. After explaining what had occurred, Mr. Dart said: “There is nothing newsworthy about the Watchtower lying.” He explained that Watchtower officials had a long history of lying, and this was well known among journalists who covered them. I was stunned.

Reforms to the blood policy would come only when the Watchtower concluded they had no other choice, or that reform served their best interests. Clearly, the Advocates for Jehovah’s Witness Reform on Blood (AJWRB) had to be at least as much about reforming the thinking of individual JW’s, and the medical community, as it was about reforming Watchtower policy.

Ratcheting up the pressure on Watchtower

I started working closely with Dr. Osamu Muramoto, M.D. “Sam” as I called him, became a friend, and a trusted adviser. And he did more to advance the cause of AJWRB within the medical community than any other single individual. It was clear that he genuinely cared about saving the lives of JW’s. Dr. Muramoto took the time to understand the Watchtower’s policy on blood, and saw the importance of educating other physicians about the discrepancies and ethical problems created by the policy. 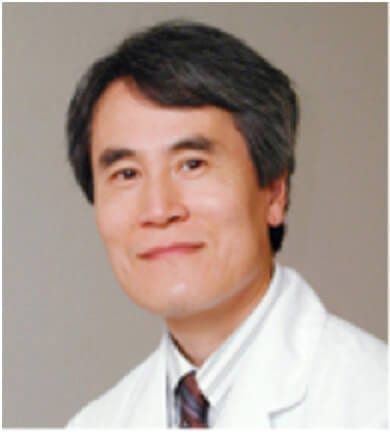 That marked the beginning of a very active period for AJWRB. Together with Dr. Muramoto, we collaborated on a series of important articles that were published in the Journal of Medical Ethics, the Western Journal of Medicine and the British Medical Journal. We hosted exhibits at the annual meetings of the American College of Emergency Physicians, and the American College of Anesthesiologists where we spoke with countless physicians regarding the Watchtower’s blood policy and the work of the Advocates for Jehovah’s Witness Reform on Blood (AJWRB). We distributed thousands of reprints of the journal articles, as well as brochures designed to assist physicians in talking with their JW patients.

The impact we were having on the Watchtower was significant. Where they had previously been able to simply shut down inquiries from questioning elders and Hospital Liaison Committee (HLC) members, they were now forced to answer for the irrational aspects of their policy, as well as the manner in which they enforced it. Previously, troublesome elders and HLC members could be silenced through disfellowshipping for “apostasy”. The anonymity of the Internet, combined with the ease of information sharing, changed that forever, but the Watchtower was slow to grasp that fact.

Never again would the Watchtower be able to blatantly misrepresent its position without challenge. Thousands of JW’s were learning what we knew, and chose to leave the organization. This was not our goal: it was simply the way things worked out. There would be shock waves as this rippled through the Jehovah’s Witness and the medical communities, and many people made use of the resources that Advocates for Jehovah’s Witness Reform on Blood (AJWRB) provided.

What do you think about this article? Do you agree? Do you have a story about the Watchtower’s blood policy that you’d like to share? We’d love to hear from you!

Here is the full press release from which the above snippet was excerpted:

Lee Elder is the pseudonym of a former Jehovah's Witness Elder.