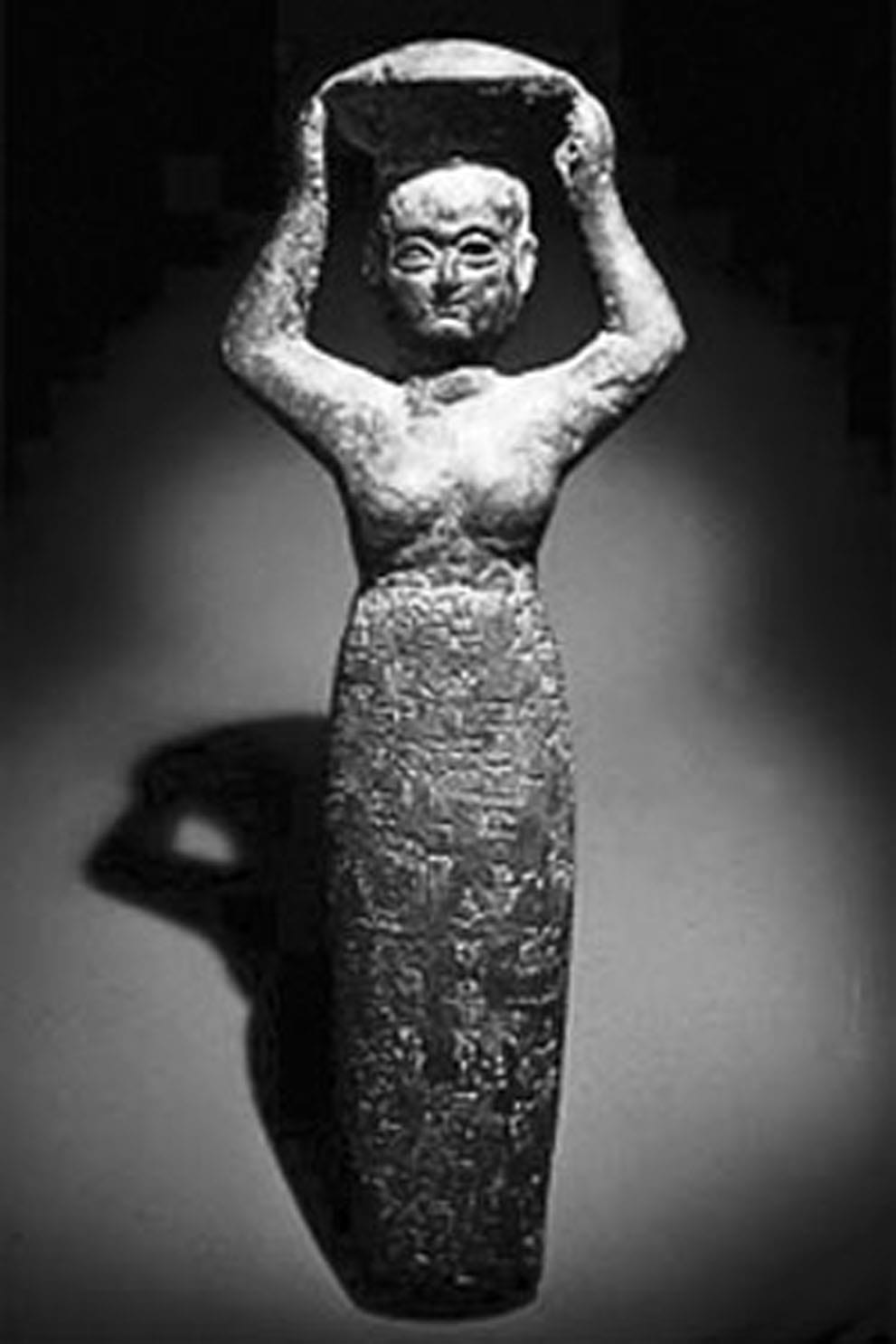 Ninkasi, the ancient Sumerian goddess of beer and brewing

Advertising, in the form of branding, reaches back at least to Sumeria, the cradle of civilization, where writing was first discovered. Beer bottle caps made there predate the crown cap by over 4000 years. This is a positive use of influence: remember our brand so that you can buy it again.

There is no clear dividing line between art, advertising and propaganda. For many centuries, European artists illustrated Bible stories for an illiterate population. In the Renaissance, art became a demonstration of wealth and influence, and a tool of propaganda utilised by the ruling class to maintain authority over the masses, as artists were paid to add images of their patrons to religious pictures.

In an early example of political spin, in the sixteenth century Queen Elizabeth I ordered all existing portraits of her to be destroyed. They were replaced with approved images, depicting her as a beautiful Virgin Queen. These approved images bore little resemblance to the reality.

By this time, advertising had been spurred on with the introduction of the printing press, which also heralded a new age of propaganda (originally the Catholic Church’s term for the office that lured defectors back into the fold, during the Reformation).

Modern advertising, however, began after the American Civil War, in the 1860s: the first modern conflict, which left a mass of physically and psychologically traumatised combatants. The pharmaceutical companies were born at this time, selling patent medicines that would be illegal today, because along with alcohol, they contained opium and cannabis. Cocaine was added to the mix at the end of the nineteenth century, and enthusiastically endorsed by Pope Leo XIII – on billboards for Mariani wine – and by Sigmund Freud, in his first published paper, Uber Coca.

Pope Leo went so far as to award a gold medal to the hard drug concoction ‘bearing his august effigy.’ Many celebrated figures endorsed the wine, including Thomas Edison, Jules Verne, the Russian Empress, Emile Zola, Alexandre Dumas and Henrik Ibsen. As with celebrities in contemporary advertising, it was hoped that endorsements by prominent figures would persuade the public at large that they would benefit from these products. 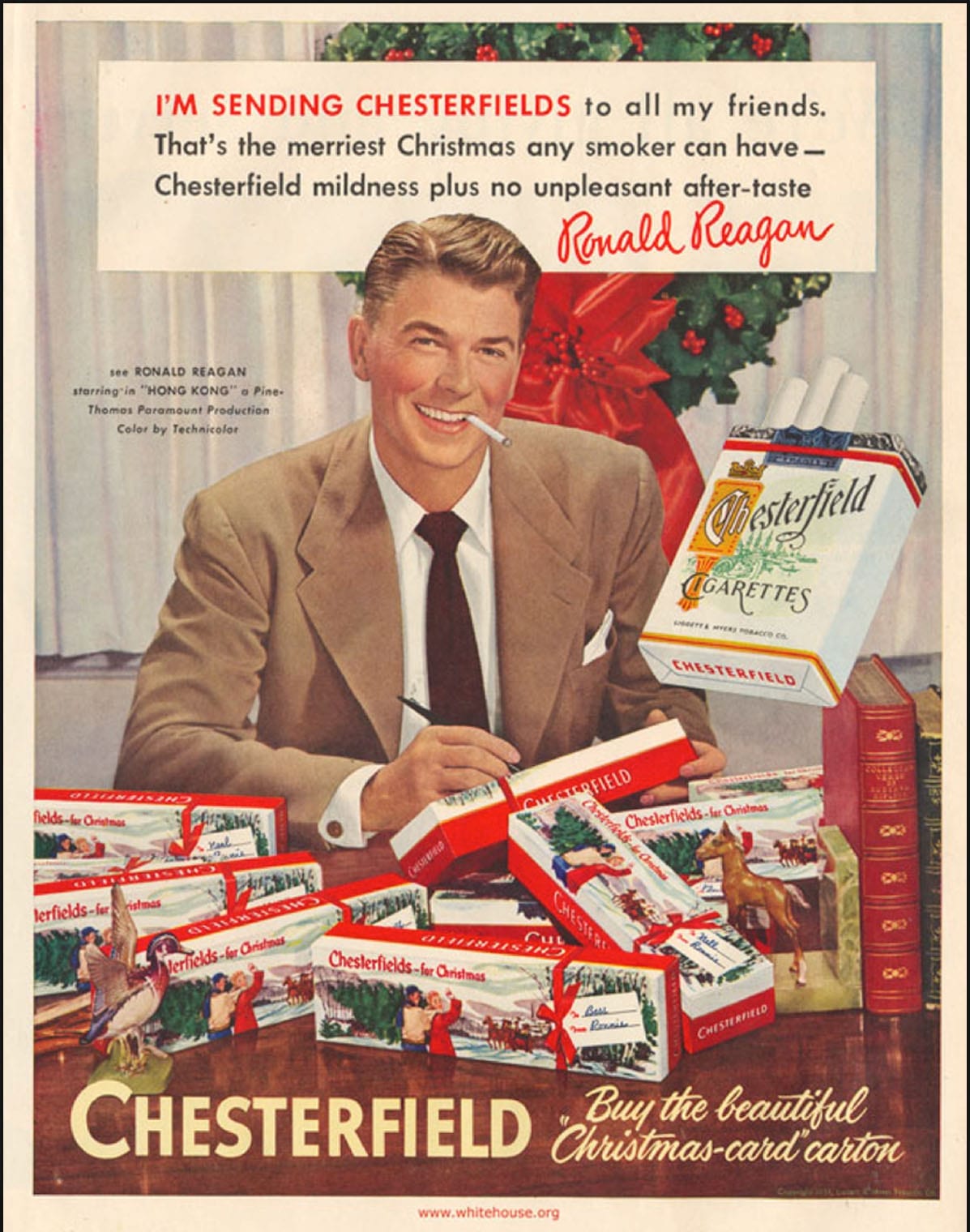 By the mid-twentieth century, advertising had come to include a plethora of new techniques. Corporations would now ‘sell the sizzle, not the steak.’ The housewife would be subjected to ‘two tarts in the kitchen’ advertisements. TV medical doctor Marcus Welby, MD (actor Robert Young) sold coffee, dressed up in a white coat. The appeal of authority gave way to the use of celebrities, so Ronald Reagan advocated not only for the Voice of America – the US anti-Communist radio station – but also Chesterfield cigarettes, in the years before his presidency.

In the 1970s, positioning theory showed that it was best to ‘position’ your product against a market leader. Avis car rentals ran against Hertz with their ‘we try harder’ campaign, which successfully increased their market share. In the UK, a very popular series of ads showed Leonard Rossiter spilling Cinzano on Joan Collins. Unfortunately for Cinzano, this led to a surge in market leader Martini’s sales. The outcome of covert influence is not always predictable.

Next came aspirational ‘lifestyle’ marketing, where the product was seen as part of an envied lifestyle. Sharper Image exemplifies this approach where the customer buys in to a way of life rather than a product.

Advertisers can afford the latest in technology, so by the 1990s, CT scanners were being used for ‘neuromarketing’ surveys. Instead of relying on verbal answers to questions – which might be influenced by the desire to please the questioner – volunteers were brain-scanned to see what their real uncensored responses were.

Coca-Cola was among the first corporations to use this new technique. This led to ‘emotional’ marketing, which tries to tap straight into the emotional centres of the brain. The most profound allegiances are rerouted, so, for instance, one fan of Pepsi talked about the patriotic rush he felt when looking at the red, white and blue logo on the can.

These days, manufacturers contribute to the funding for movies, with the guarantee that their products will feature prominently in the resulting film. This ‘product placement’ may very well work at a hypnotic level.

The whole drift of advertising is to induce an experience, to create an emotional demand for a product or service. And advertising is a mainstay of modern life. We watch films and go to concerts, because we want to be given an experience. Sitting at home and watching a film on the TV, or listening to music on a sound system, is quite different from participating in a group. This receptivity to group experience makes us more susceptible to the contrived tricks of exploiters. We experience a natural high when in company, whether it is a rock concert or a political rally. That innocent high is easily manipulated.

This is an excerpt from chapter 7 of Jon’s book, Opening Minds: the secret world of manipulation, undue influence, and brainwashing