Our Susceptibility to Undue Influence

It is not just the Internet that is rife with scams. Trickery is an aspect of human nature, and it reaches back long before the advent of the world wide web. Indeed, some students of animal behavior say that lying is the first stage in the evolution of intelligence.

Californian jays have been observed pretending to bury food, and then quickly concealing their actual stash, while their rivals scrabble about in the false hiding place. 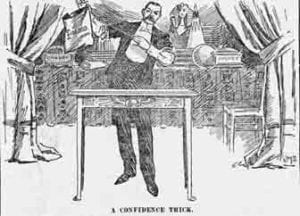 Pride does indeed come before a fall. If there is one lesson that we should all learn, and relearn, as often as necessary, it is that no one is invulnerable to unethical persuasion (undue influence).

Not even those of us who make it our life’s work. Indeed, it is confidence in our invulnerability that makes us so vulnerable.

Despite decades of immersion in the world of hucksters, I, too, can still be charmed, cajoled, and led like a lamb to the slaughter.