Larry Nassar, who used his position of authority to sexually abuse over two hundred teenage gymnasts, also used his role of comforter and advocate to lure his victims into a state of compliance. He was the “good guy,” the confidant, the friendly doctor who pretended to speak for the gymnasts’ safety and wellbeing. As a member of the organization responsible for training Olympic gymnasts in the United States, Nassar charmed young athletes and their families, established relationships, gifted his patients with trinkets from his Olympic travels and talked of his prowess as the “body whisperer.” 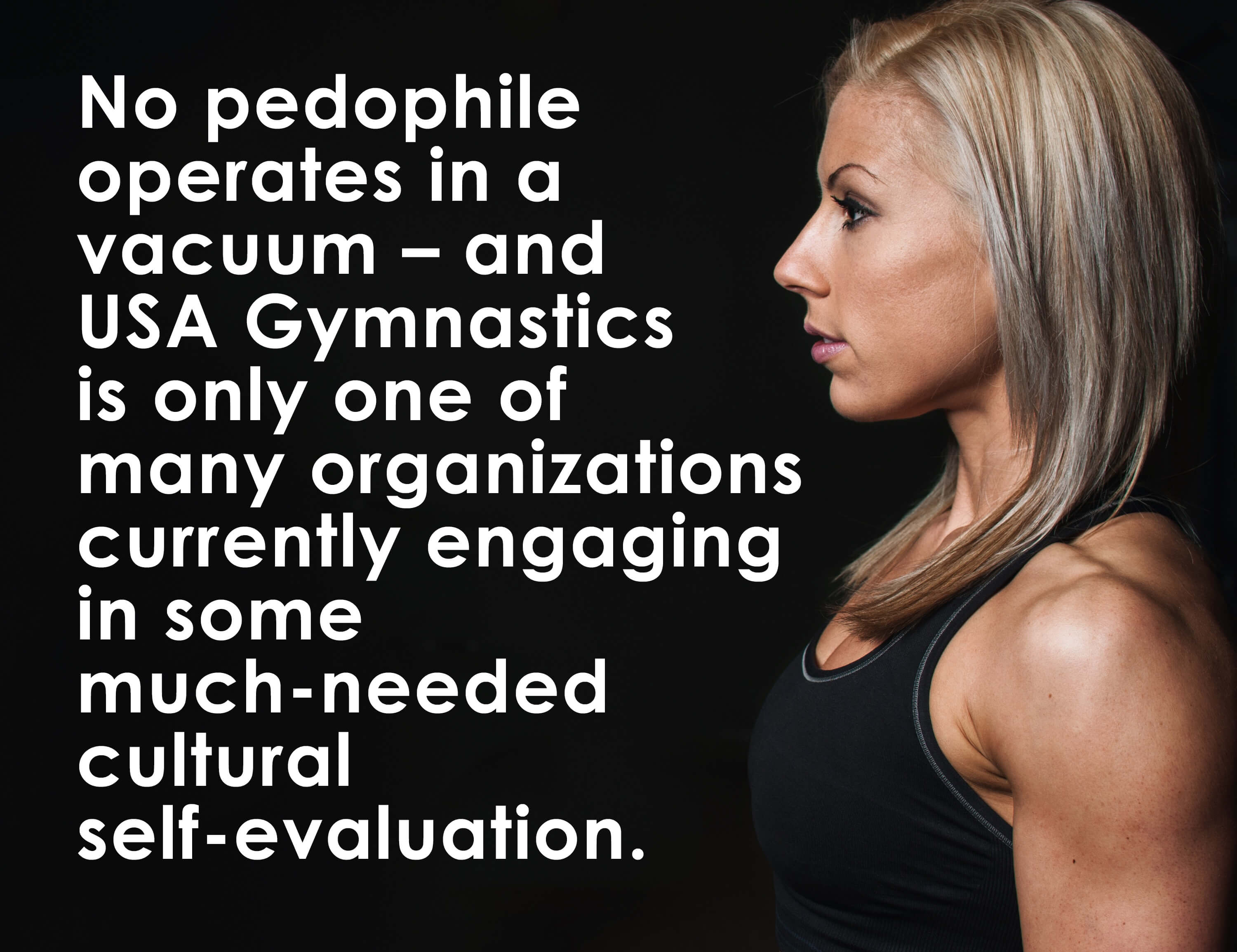 This camouflage of advocate and healer was part of the plan: in order to molest his victims, Nassar first had to groom them. In order to keep molesting them, he had to groom the families of his victims, as well as his colleagues and his professional network. Granted, no pedophile operates in a vacuum – and USA Gymnastics is only one of many organizations currently engaging in some much-needed cultural self-evaluation: Nassar is not the first offender whose victims had to wait for years for their complaints to be heard, and their stories vindicated. But if the man himself had not been such a skilled manipulator, he would not have been able to work his way into the core of a national Olympic training ground, or have had access to thousands of young girls in a profession requiring close, intimate contact.

Disguising his criminal actions as part of a medical procedure was only part of the gaslighting involved to create an air of confusion and denial; Nassar was able to keep his victims wondering if what they had experienced was indeed abusive or sexual. Even worse, in grooming his professional colleagues, he was able to manipulate Michigan State University officials into believing in his innocence so thoroughly that they compounded his crimes, informing his accusers that they had failed to distinguish the “nuanced difference” between legitimate examination and sexual abuse. The egregious shortcomings in a system disastrously ill-equipped to deal with complaints of sexual assault certainly aided and abetted him, but ultimately, it was because he was so skilled in social manipulation that Nassar was able to accumulate a “stable” of victims numbering in the triple digits.

Pedophile grooming relies on a confidence trick, just like any phone scam or pyramid scheme; it trades on the innocence of children rather than money, but the traps a predator uses to lure victims into danger, and the web of undue influence they weave to keep their victims ensnared, remain the same. If we are to break the cycle of sex abuse scandals rocking even our most venerable institutions, we must educate children, parents, professionals and everyone involved to recognize the patterns of abuse – and not to repeat yesterday’s mistakes in failing to use our healthy skepticism. Only when we face grooming for what it is can we keep our children safe.

What do you think about this article? Do you agree? Do you have a story about pedophile grooming that you’d like to share? We’d love to hear from you!