An accountant, known and respected for his accuracy and diligence at work, was nonetheless somewhat of a mystery in his small office for over a half century. Polite and soft-spoken, he talked very little and avoided conversation, preferring to work through his lunch hour rather than socialize. He was the first to arrive and the last to leave every day; no one could remember him ever taking a day off sick. However, everyone who worked with him noticed one small, subtle habit: at the start of every fresh task, he would open his top desk drawer, peer into a manila file folder kept there, nod to himself solemnly, and then replace the folder in the drawer and begin his work.

Although no one wished to ask him directly about this ritual, his co-workers speculated endlessly upon its meaning. What was in the folder? Was it some bit of inspiration or wisdom? Some rules of thumb that helped him in his task? A picture of a loved one? In this small, intimate office, it was the one topic of conversation that never grew old.

The accountant, however, did grow old, and eventually died: his co-workers arrived one morning to find him slumped over his desk, his slide-rule clutched in his hand. As the coroner took him away, the rest of the office waited a full five minutes before someone spoke the words that were going through everyone’s minds:

“It wouldn’t be disrespectful to look in the folder now, would it?”

The senior manager approached the drawer, the rest of the staff clustered around her. She slid out the drawer solemnly, and held her breath as she pulled out the folder and opened it. Taped inside was a single sheet of paper, with only five words:

“Debits go on the left.” 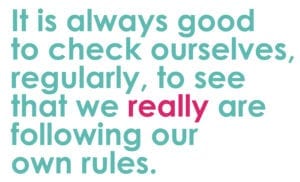 Although accountancy has changed since the days of slide rules and paper ledgers, the practice of entering debits to the left is so universal that the idea of an experienced accountant having to remind himself about it is absurd. However, this anecdote from early 20th century humorist Bennet Cerf contains an important grain of wisdom: no matter how absurd it might seem, it is always good to remind ourselves of the basics, and to check ourselves, regularly, to see that we really are following our own rules.

The hypocrisy of a high-control group campaigning for “human rights” while denying those rights to its members is easy to see – from the outside. But we are all blind to our own hypocrisies: from the environmentalist who uses K-cups for her coffee, to the vegetarian wearing leather shoes, to the economist who complains about the death of small retail, yet buys everything from Amazon and Wal-Mart.

When invoking critical thinking and healthy skepticism, it is important to check our preconceptions – even (and especially!) our dearest and oldest-held beliefs.

What do you think about this article? Do you agree? Have you read Spike’s dystopian novel? Do you have a story about all-or-nothing thinking that you’d like to share? We’d love to hear from you!