Doctrine Over Person, one of Robert Lifton’s Eight Criteria of Thought Control, is the act of giving more weight to belief than to reality. It happens when belief in a person, group, or philosophy becomes more important than the experiences or perceptions of any individual involved. The implied message is: “if your facts disagree with our teachings, then you’ve got the facts wrong.”

Doctrine over person allows a manipulative person to mistreat others over and over again with impunity: it doesn’t matter if you remember a thousand times Aunt Bertha raised her voice in anger, what matters is that she never, ever yells. Combining doctrine over person with circular reasoning, an abusive group can claim infallibility for its leadership, even after many failures: Dear Leader is always right, and if he is found to be wrong, then he is still right, because he is Dear Leader.

A popular fictional portrayal of doctrine over person can be found in Monty Python’s famous “Dead Parrot Sketch:” a man whose newly-purchased parrot has just died is met with complete denial from the clerk at the pet shop. Although the parrot is “stone dead,” Michael Palin, as the pet-shop employee, insists that it is merely “resting.” No amount of proof in the form of an actual, dead bird being thumped on the counter by a hilariously furious John Cleese will make him admit to reality. 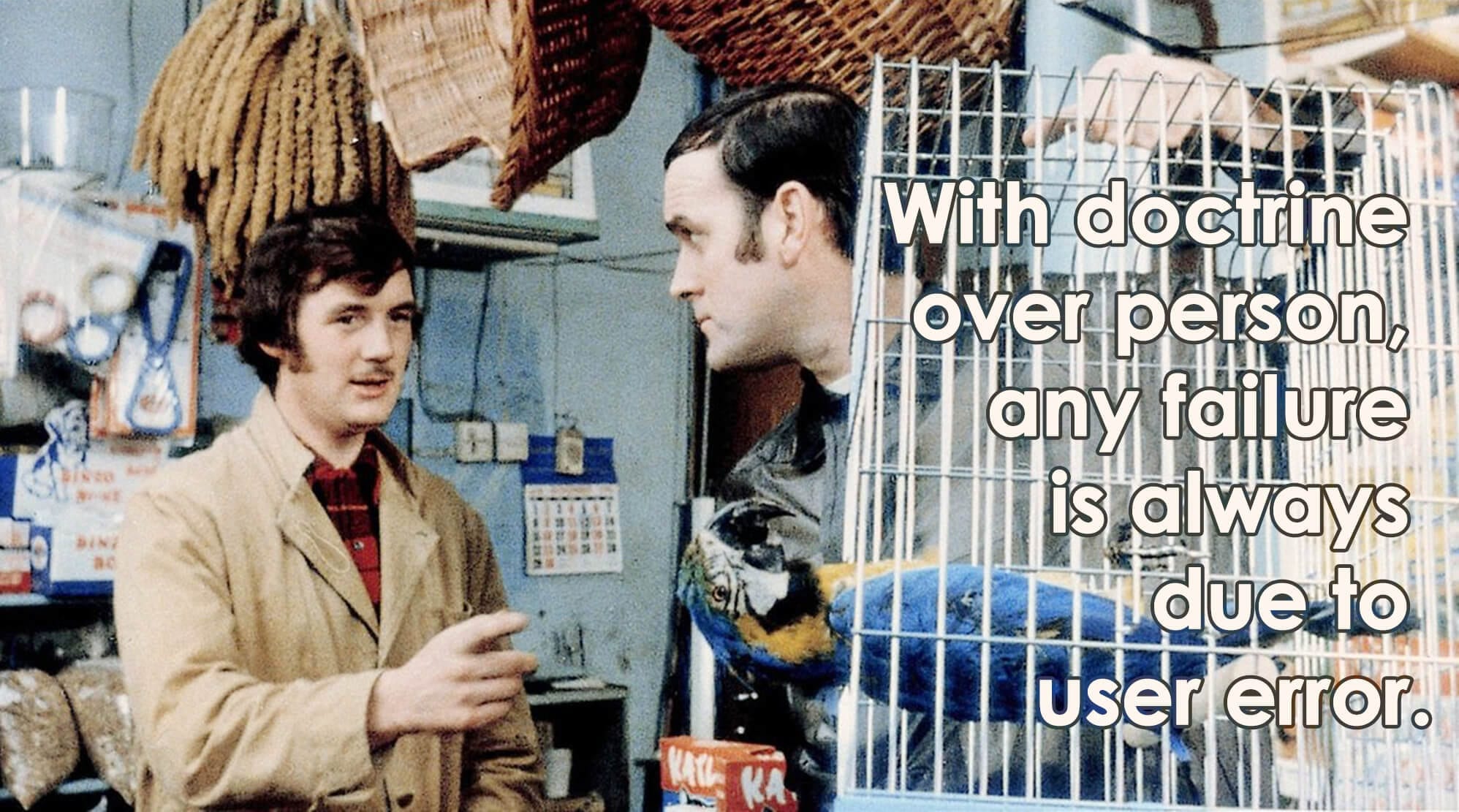 Although this example is pushed to extremes for humor’s sake, it still strongly resembles the form of manipulation experienced by anyone who has been scammed by a fraudster (the sketch itself was inspired by Palin’s real-life experience with an auto mechanic): when a product doesn’t give us the promised results, a skilled manipulator will glibly inform us that it’s not the product that doesn’t work, but that we didn’t use it correctly. With doctrine over person, any failure is always due to user error, rather than the product or service itself.

An abusive group or manipulative predator can use doctrine over person to gaslight people into believing that the leader has never been wrong, that any allegations of wrongdoing come from enemies with sinister agendas, or that a group of miserable, over-worked and underpaid cult members are “the happiest people on earth.” However, those who practice healthy skepticism can learn, by spotting the patterns of denial, to see the lies for what they are, and to know that the parrot is, indeed, no more.

What do you think about this article? Do you agree? Do you have a story about doctrine over person that you’d like to share? We’d love to hear from you!