A Bat, flitting through the forest, was captured by a gang of woodland Beasts.

“We are at war with the Birds,” they told him angrily. “You fly through the air like a Bird, but you have fur. Are you Beast or Bird?”

“I am a Beast,” he told them, and was released.

Flying on through the forest, he was soon caught by a group of Birds. “We see that you look like a Beast, but you fly like a Bird,” they shouted. “We are at war with the Beasts. So, are you Beast or Bird?”

Eventually, the Birds and the Beasts settled their differences, but when they came to a census of who was a Bird and who was a Beast, they found the Bat on both lists. The combined council of Birds and Beasts called him forward, asking him to choose, once and for all, whether he was Bird or Beast.

“Can I not be both?” he protested. “Indeed, during the war I pretended to be one or the other to escape harm, but I have never felt enmity to either side, and count myself as kin to both.”

However, those who had fought fiercely in the war disagreed, insisting that no one could be aligned with both sides – otherwise, why had they fought, killed, and even died? So, the council of Beasts and Birds expelled him from both circles; to this day, the Bat flies alone, separated forever from the rest of the Creatures.

Of course, anyone who has taken a biology course knows that the Bat is a mammal, not a bird, but fables, with their talking animals and ever-present demigods, do not need to be biologically accurate to teach us their lessons. So, I have shifted the original narrative – where the bat is a coward who switches sides based on who is winning the battle – to fit the cautionary lesson upon the dangers of black and white, all or nothing, Manichean thinking.

This limited worldview is found in totalist groups and abusive relationships. One is either part of the elect or of the damned, with us or against us, part of the solution or part of the problem. This habit of thinking can follow survivors of such groups and relationships into their lives after they escape: those who still believe in the group’s teachings while speaking out against the abuses of the leadership are viewed with suspicion and even animosity by those who have yet to shed the belief system completely – and vice versa: there are angry people in every camp. Sometimes, cliques of survivors create circles every bit as isolationist as the cults they have escaped: if you are friends with this other survivor we don’t like, then you cannot be part of our club, and are every bit as evil as the cult we have escaped.

Shunning has become a practice: ignore, rather than persuade. Those still in the group are stripped of their human worth, demonized and treated as vermin. Anyone who disagrees with the opinions of how the “mother cult” should be treated are labeled enemies. Just as in the cult, there is only right vs. wrong, us vs. them, evil vs. good. And those survivors still caught up in cult-think will show the same hostility to those still in that they once felt to disbelievers.

Even those whose lives have never been shadowed by a coercive relationship often fall into this habit: this politician can do no good, that celebrity can do no bad. All the followers of this faith are evil, anyone who belongs to our club must be protected at all costs. Too often, the heuristic “shortcuts” we use to make sense of our world become intellectual crutches at best, and thought-stopping straitjackets at worst. Once the disease of all-or-nothing categorization sinks in, even the most rational and compassionate of us can ignore the humanity of millions with a single, thought-stopping phrase. 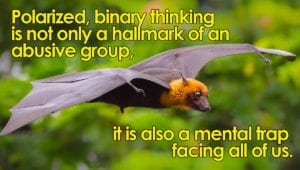 However, human experience and opinion is much richer and more diverse than the binary, limited choices offered in a black and white setting. Just as we can have flying mammals and flightless birds, we can have people who agree that an abusive group is harmful, but do not agree with us on what to do about the group or even the nature of the harm. Polarized, binary, black-and-white, Manichean thinking is not only a hallmark of an abusive group, it is also a mental trap facing all of us. It is up to each of us to be aware of polarizing attitudes, and remember that, most of the time, the answer is not one extreme or the other, but a middle path of moderation and acceptance of differing opinions. There is no value in simply dominating other people; to be wise, we have to talk and we have to consider facts – from both “sides” of any question. And, as Isaiah Berlin said, we should be intolerant of intolerance.

What do you think about this article? Do you agree? Have you read Spike’s dystopian novel? Do you have a story about all-or-nothing thinking that you’d like to share? We’d love to hear from you!