The Squirrels and the Rabbits, after many years of feuding, were about to come to a truce. Most of the other animals rejoiced: they had grown tired of the endless scuffling in underfoot burrows and the shrill, hectoring curses from overhead branches. The Fox, however, was not pleased. He liked to sit quietly under a disputed bush or tree, and wait for two or three combatants to scurry by, their normal caution blunted by anger. He enjoyed this quick route to a good supper, and didn’t want to lose it.

Fox also knew his opinion was bound to be unpopular, so he wore a mask of vulpine concern when he approached Mother Hedgehog, who was a longtime friend of a prominent Rabbit family. “Like you, I’m glad the Rabbits are parleying with the Squirrels, at last,” he declared suavely. “I do hope that the Rabbits aren’t making a grave error, trusting those Squirrels.” He refused to be drawn further, only mentioning some “rumors” about a plot to betray the Rabbits, adding: “It’s probably nothing. But still, one wonders….”

Next, the Fox visited an old Chipmunk, who was like a second father to the Chief Squirrel. “You must be so proud of your young friend! He’s certainly brave to be brokering peace in times like these, and with the Rabbits, even! Never mind all those rumors one hears, he just soldiers on and – what rumors? Oh, well, if you haven’t heard, then there must be nothing to them! That said, I am surprised….”

Over a dozen more visits, the wily Fox used his memory of the two tribes’ ongoing battles, and sought out the animals who had been hurt by the feuding – those who had their burrows trampled through, those who had nuts and twigs rain down on their heads; in short, everyone who could possibly hold a grudge against either Squirrel or Rabbit had a trip through their bad memories, courtesy of the Fox. But he not only revived the old injuries; he exaggerated them, and put them in the worst possible light.

Pretty soon, the whole forest was on the brink of battle, with those injured by Squirrels joining the Rabbits’ cause, and those injured by the Rabbits siding with the Squirrels. The Squirrels and the Rabbits, paranoid and jumpy about the vague rumors no one could quite trace (but everyone was now repeating), abandoned all talks of truce, and were, once more, easy prey for the Fox.

We humans are social creatures; we can be fiercely loyal to our “team”, be it our family, our neighborhood, our political party or our nation. We also don’t take kindly to people hurting those we love – sometimes, we don’t even need proof of that hurt to react. Sadly, once we decide to start distrusting and disliking the “other side,” it’s much harder to make peace, partly because we’re also hot-headed, proud creatures, and often say things we shouldn’t in the heat of the moment, and all too often because we find it hard to swallow our pride and admit that we might have been wrong.

And sadly, sometimes, people who serve only their own interests – whether it be a predatory individual or a coercive group – will deliberately “stir the pot”, fostering enmity and sowing fear through “triangulation”. Abusers will use this fear to keep their victims in the net of undue influence, and to lure others in: it’s a scary world, they’ll tell you, and you can’t trust anyone. Except for us, of course… 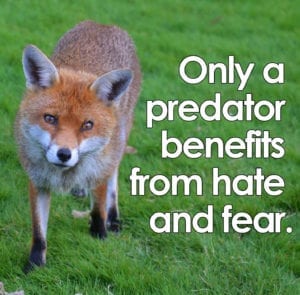 When “battle lines” are being drawn, before taking sides, we should take stock: examine what we know, and how we know it. A totalist group or manipulative individual won’t want you to think, they’ll want you to fight, and to keep fighting: those other people don’t have a different viewpoint, they’re just evil! You can’t go to another church, it’s a front for Satan! We can’t talk to those people, they’re vermin!

Those who practice healthy skepticism know that only a predator benefits from hate and fear.

What do you think about this article? Do you agree? Have you read Spike’s dystopian novel? Do you have a story about triangulation that you’d like to share? We’d love to hear from you!