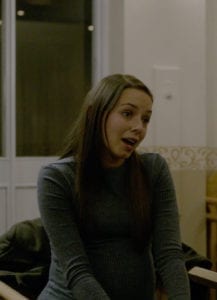 The young woman looks directly at the three men sitting across from her. “You’re not policemen of my life,” she tells them.

“That’s not what we’re doing,” one of the men answers. And yet, in Apostasy, a haunting film by director Daniel Kokotajlo, the three men have told Luisa Whitling and her mother that they must not socialize with each other; to regain her position as a Jehovah’s Witness (and for her mother to keep her good standing with the organization), they must abstain from anything but “necessary” contact.

The reason? Luisa is pregnant – with the child of a “worldly” man, and out of wedlock. In the highly restrictive world of Jehovah’s Witnesses, this is a “disfellowshipping” offense – those who love her must pretend that she is not there. Continuing normal, “unnecessary” contact is also a disfellowshipping offense.

And so, Luisa is left alone. She is frightened, she is lonely, and she just wants her mother. But these elders, while insisting that they are not policing her, still use their influence, as the supposed guardians of their salvation, to keep mother and daughter apart. 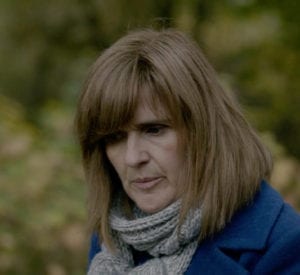 The tragedy is palpable: Ivanna, the devout mother, loves both her daughters deeply, and yet she cannot bring herself to go against the religion which has become the center of her life. She readily believes that she and her daughters are only worthy of divine acceptance insofar as they can please Jehovah: “you need to earn His love; it’s conditional,” she tells her daughter Luisa in a tense scene. Her younger daughter, Alex, has also learned to think that she will never be good enough in the Creator’s eyes. In the girl’s prayers, she is constantly apologizing to Jehovah and comparing herself unfavorably to others – her low self-esteem earning her praise from the elders. Her self-esteem has been destroyed.

Director Kokotajlo highlights the Orwellian nature of the Watchtower in one particularly striking scene where the mother Ivanna, reeling from the enforced separation from her daughter, flees to the Kingdom Hall restroom, but finds no sanctuary there, as the built-in speaker broadcasts the continuing harangue from the platform: “If God was to say that this book is green, when it’s actually red,” the elder proclaims, “then maybe it is green. What do I really know? Such is His guidance.” Ivanna, trapped in her belief that these men speak for God, must believe that red is green – and that she must shun the daughter she loves, withdrawing all emotional support when both women need each other the most. 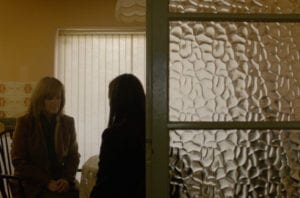 Hailed by many former Jehovah’s Witnesses as a frighteningly accurate picture of the control wielded by the Watchtower over their flock, Apostasy is also a brilliant demonstration of cinematic skill: shot in an ultra-realistic, “slice of life” style, with no musical soundtrack, the film nonetheless attains a dreamlike quality, with the actors often speaking their characters’ inner monologue in scene, without any voiceover – a stunning directorial choice which only deepens the sense of immersion in the story. The muted colors and somber scenery provide a fitting backdrop for this tragic story of love and loss.

Ultimately, however, it is the subject matter – and the heart-rending accuracy of the plot – that marks it as a “must-watch” for anyone who has ever known someone in a high-control group. I wholeheartedly recommend this film, but I also advise American viewers to turn on the subtitles if you are not used to British accents: you won’t want to miss a single word of this densely-packed, profound drama as it unfolds.

What do you think about this review? Do you agree? Have you watched Apostasy? Do you have a movie that you’d like to see us review? We’d love to hear from you!